I recently heard news that an Underworld 5 is in the offing... hoping for a return to form after the dismal 4th film the wife and I had an Underworld marathon of the original trilogy at the weekend and I came out of it really wanting to create some terrain that's a blend of William's prison from the 2nd film and the vampire castle from the 3rd.

There's been a lot of talk around me about dungeons at the moment. After BOYL on the drive home Harry, Chris and I were discussing a dungeon bask project for next year. Then Harry's Twisting Catacombs stuff turned up (mine's still not here, boo), then Maki Games announced an imminent revival of their Modular Underground project.

With the release of 'Secrets' thoughts have turned to the next sourcebook instalment for The Woods. This will take the action to the conflict between the Gnomes and Goblins in the mountains, working title "Thunder under Mount Silence". Obviously I'm going to need some underground terrain for playtesting and photography. 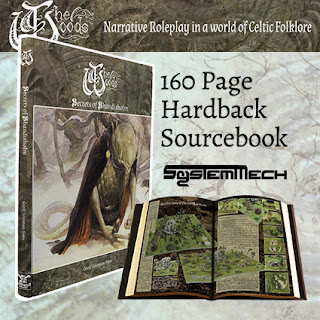 We lately took delivery of a new bandsaw at work which came in an elaborate and large polystyrene box, with lots of dungeon features...

With all this happening and a few weeks of quiet summer left it would be very rude not to do something about it don't you think? 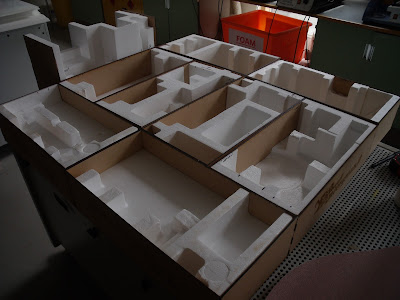 What you're looking at here is the bandsaw box chopped into chunks and surrounded with MDF (which I laser-engraved with a nice Oakbound logo for when we take it to shows). There are 8 modules measuring 45cm by 22.5cm each, giving a 3' square dungeon. Of course they can be arranged in rectangular or linear fashion as well. I figured a 3' square would be about as far as you'd want to lean to move figures. There's also a double-height section because the packing was too cool to chop up. This can add on, or displace one of the other modules which can then be stacked to give a second double-height section.
What's especially good about this size is that it means my modular board tiles which are swamp one side and cobbled the other will fit in nicely as they're 22.5cm wide and 66cm long (I can cope with the 15mm gap, might make some inserts). 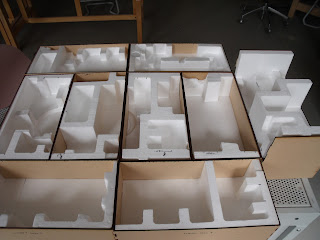 The depth of each module is 12cm, with the floor depth varying between 4cm and 10cm. Now I've moaned about accessibility for play in dungeons with walls before and granted some of those areas are pretty tight. I've tried to keep as many open areas as possible and there will be lots of levels built in so the narrow spaces aren't as hard to reach. BUT I am a bit concerned about getting in to decorate, play and photograph so some of the MDF walls might be made removable once I've got the basic forms in place. 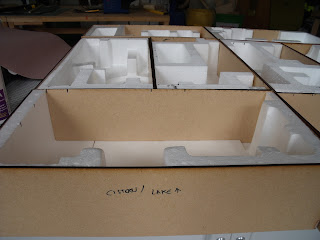 After boxing everything up I decided what I wanted each room to be. Library, cistern, council chamber, lower gatehouse etc. Actually I have two libraries because I've wanted to do something like the library from Gormeghast for some time. I then marked in lots of doors, making sure there were some standard connections and plenty of options for the feature doors, matching them in as closely as possible with the layout of the polystyrene. One of the good things about having the thick walls and different levels in there is that it doesn't matter too much if doors shift along slightly, don't line up or seem to lead nowhere. The thickness of the wall means an unseen narrow corridor, stairway or cupboard can easily be claimed. 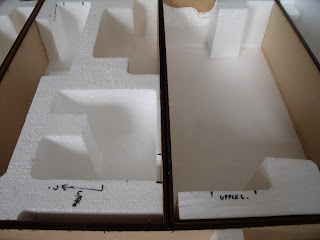 For transport and storage these modules will stack together into a relatively tight 45cmx45cmx60cm block. I'll make a little trolley with some fixings on so it can be wheeled around for events and games at other people's houses. 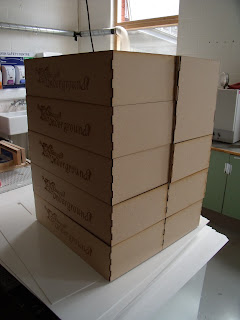 Mad to start something else, especially something this big, with the planned undead army and lots of commission sculpting to get on with? Well sure, but anyone who knows me will tell you I'm never too busy to start another project... finishing, well, that's another matter. I still have a few books to bind...!