The dead begin to rise... Essex and Celtos skeleton reviews

Yesterday the first of my purchases for my Undead force arrived. As they trickle in I'll do a quick review about the figures and how they'll fit into the army as there's quite a lot of skeleton miniatures around to choose from and plenty of variation in style and size. 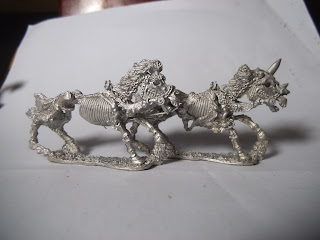 First up, the Essex Mounted Skeletons (Q86, 87, 88 and 89) by Bob Olley. The Essex website is not particularly helpful, with no photos of these miniatures, but fortunately they are on the lost minis wiki... well, some idea of what they look like is anyway. Since the Bob Olley Liche Master is my starting point this seemed like a good place to begin building the army, at least ensuring the skeleton horses matched. There appear to be just two horse variants, the afro horse and the spiky horse, but I'm a big fan of the style of these and I reckon a bit of careful cutting and bending will produce a lot more variation in pose. The metal is quite soft and should bend well (lots of lead in there I reckon). 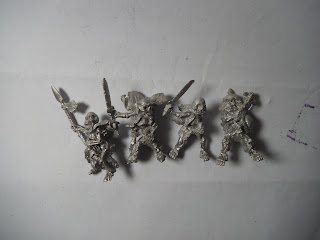 The figures are what you'd probably expect from Olley skeletons. The bodies don't look overly chunky (especially compared to GW plastics) but the skulls are massive. The Liche Master has a big head, and these skulls are probably in scale with that, but they look pretty goofy. As I'm only having one 'fleshy' (the Liche Master) in the army his big head will be fine but pretty much all the other skeletons will have smaller heads so I'll probably end up chopping off these guys' heads and replacing them with the Ral Partha skulls. The Q88 skeleton (helmet, axe and shield, shown far right) is particularly horrible to my eyes, looking like an undead Genghis Khan with an ineffectual, stubby axe. I might replace the whole figure with a spare from somewhere else. On the plus side there's a good sense of movement in most of the sculpts and the detail on the bodies is nice and textural, just how I like my fantasy minis! With postage these guys worked out at just over £18 for the 4, cheaper than any other skeleton cavalry I've seen, but I would say you're mainly paying for the horses here and might want to look elsewhere for the riders. 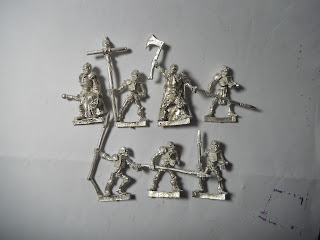 The other package which arrived was from Brigade Models which stock the Celtos range I believed was OOP. Thanks to Dan/Xero_Fuchs for the tip off. At £12 for a pack of 12 spearmen with command you can't fault the value. In the pic above the command is top row, troopers below. You get one of each of the command models and three of each of the troopers, plus metal shields and round bases. I should say that you don't get the axe guy thrown in, he's an extra £3.50, but was so appropriate to the army theme I had to stick him on the order. All in they also cost me just over £18 with shipping, probably as good as you're going to get with metal skeletons. There's a bit of flash to scrape and trim, but they're pretty clean casts and very shiny models. I'm used to Celtos Sidhe and Humans being on the chunky side so was prepared for big bones, but they're actually slim and well proportioned. Well, about as slim as you'd want in metal anyway, comparable to the c-series Citadel skeletons. Poses are good, a bit of gentle bending should produce variation across the unit, and the detail is basic but ok. Painting them should be fast, which is something else you want for large blocks of skeletons!

Ok, that's it for now. Waiting for my Mantic order to arrive. Still looking for trades/second hand purchases of RAFM skeletons, Iron Claw horses and the Dark Knight/mounted Wight from the Circle of Blood campaign (in metal) if anyone has them.

The dead begin to rise... Essex and Celtos skeleton reviews