Back in January I needed some nice scenery to photograph the Marsh Demons against. Of course I had used my back garden for my army shots: 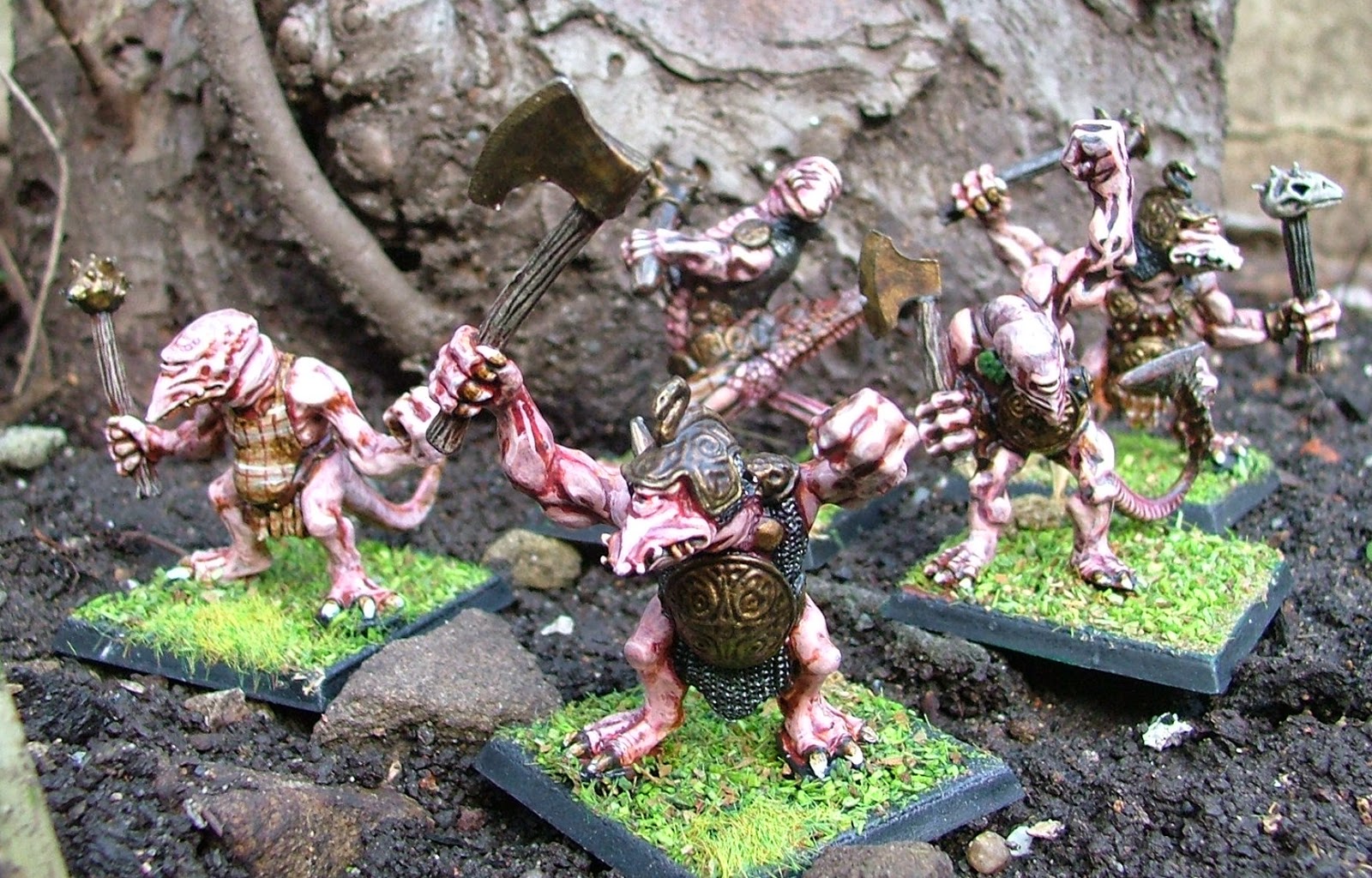 And borrowed Bristol Vanguard's marsh board for these shots of Oakbound's Marsh Demons: 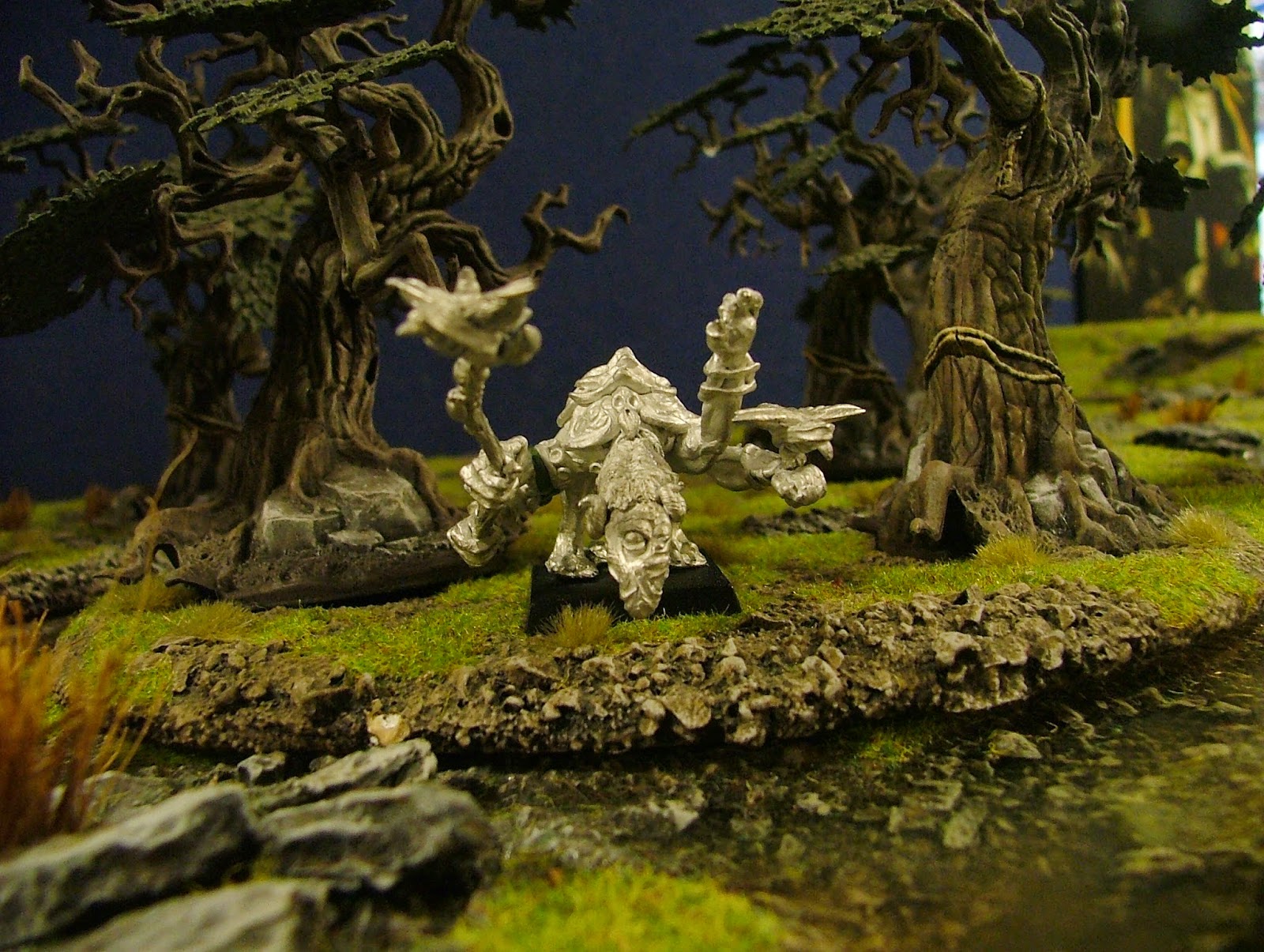 ﻿
But with the (then) forthcoming Kickstarter in mind I wanted something which better represented the world of The Woods that these characters inhabit. At the same time my lovely partner and I were spending quite a lot of time walking through the beautiful misty mornings of Vassal's park, Bristol: 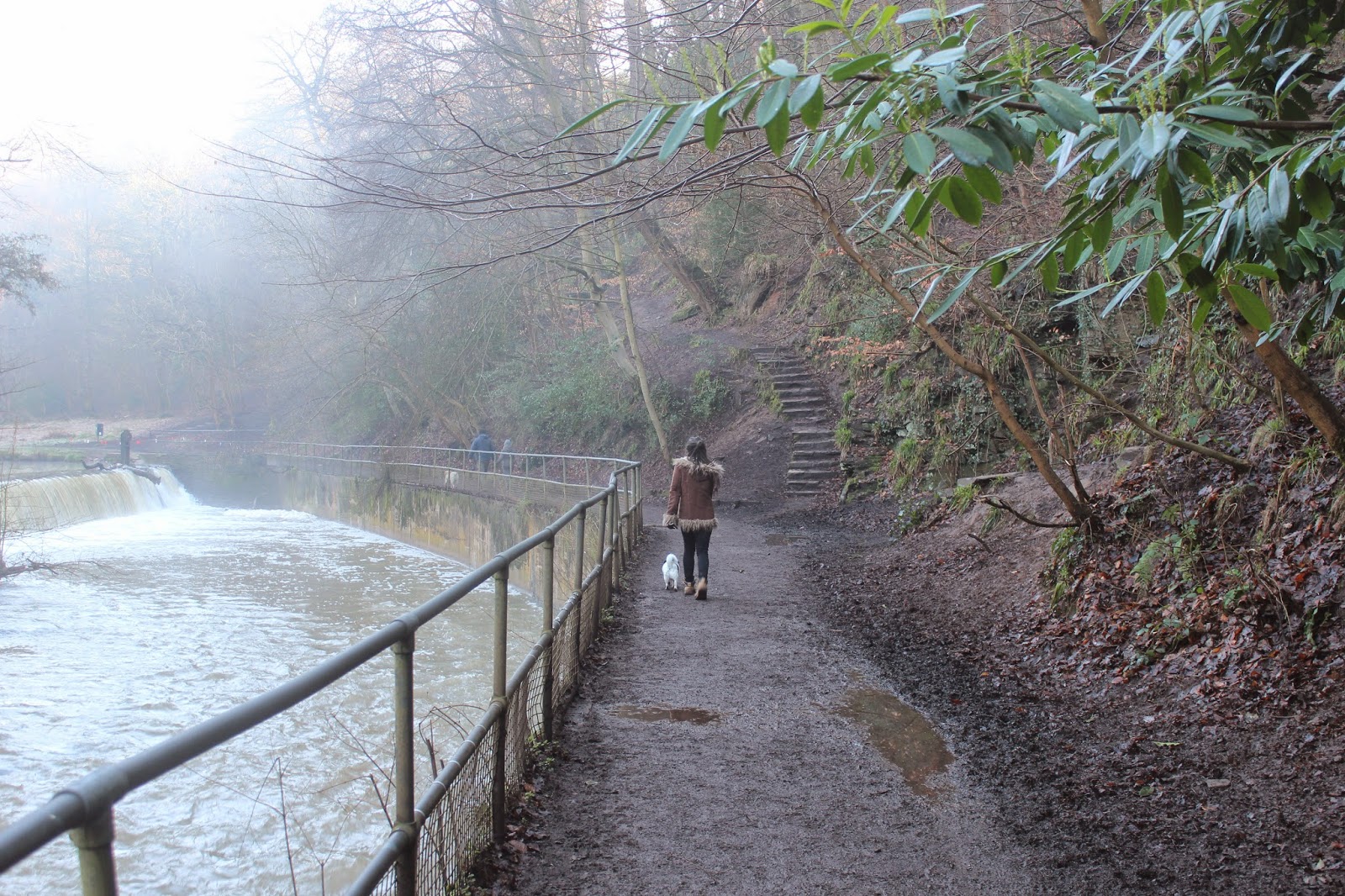 With its steep, wooded slopes, winding stone steps and river this was exactly the English countryside feel I wanted for the range. It reminded me of holidays to Dartmoor when I was younger, scenery which almost certainly influenced my love of the work of Brian Froud who bases much of his work on the rugged and bleak beauty of that area. I snapped a lot of photos and began to plan out how the scenery would work.

I wanted something that would provide a background, so having height was important. I also wanted scenery that could be put together in different ways and photographed from different angles to give an idea of how vast the wood is. Of course, I also wanted to b able to use the scenery for games, but more as a border for a board, or perhaps as two sides of a valley running along board edges from which an ambush is sprung. With this in mind I designed and built four levels of modules- two tall modules, a choice of four medium modules that would sit in front, four low modules that would complete the slope and a selection of square flat modules that could have river sections built onto them. The medium and low modules would be deep to allow for miniatures to be placed on paths winding through them, the tall modules would be largely to provide backdrops.

The frames with their Styrofoam cladding were finished in February. I was hoping to have the scenery ready for the UK Games Expo in June. The modules were cut so that the silhouette of each end would butt evenly up against the next. I also designed a large corner module so I could make L-Shaped setups. Then I got busy with the Tripods! release, designing and releasing The Woods, painting up the Marsh Demon masters, sculpting for the kickstarter.... then June came. 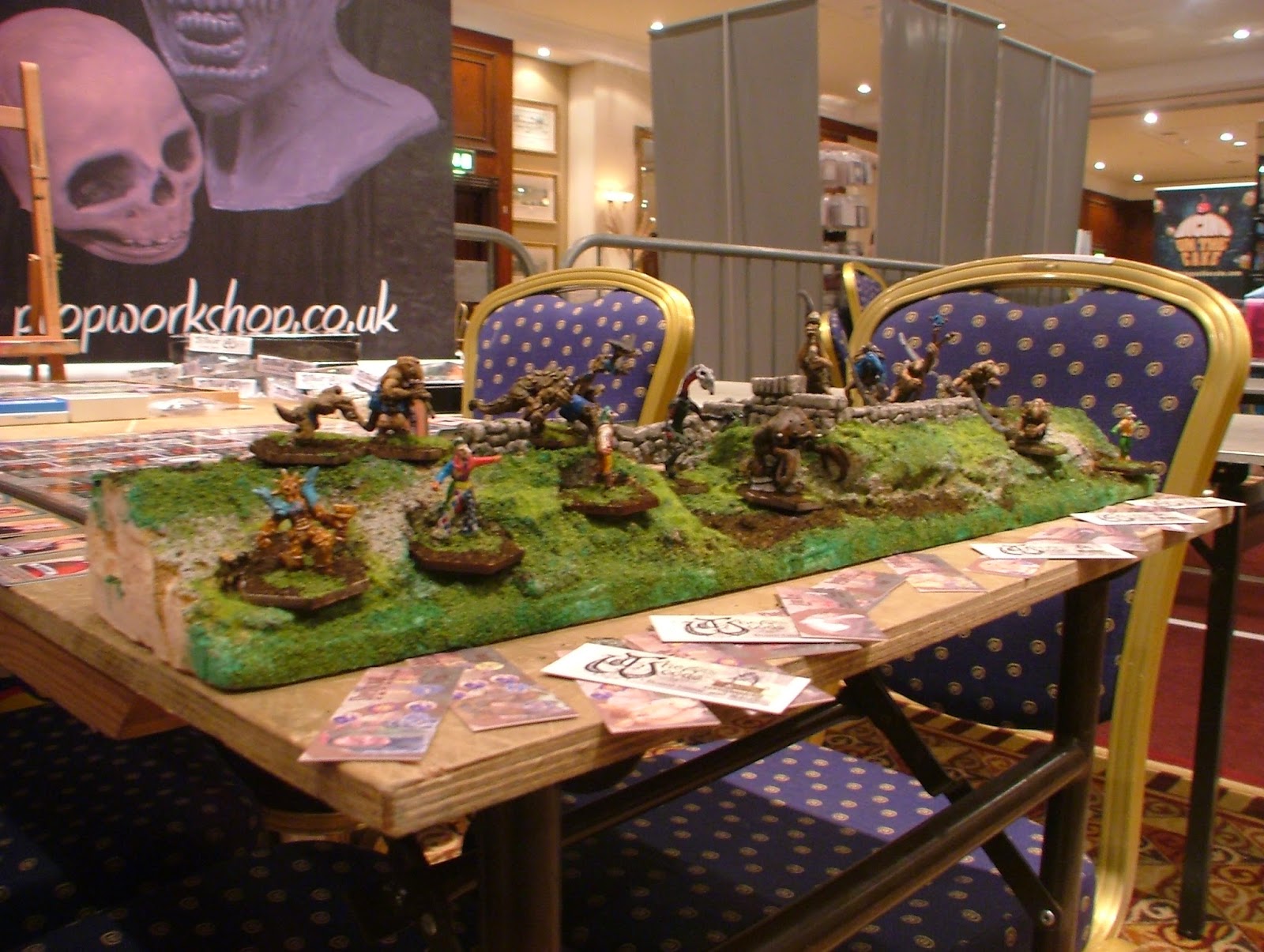 As you can see, a rather hastily constructed piece of terrain! As it happens there wasn't space for much else so this worked fine, but I was determined to have better ready for the full range should the Kickstarter complete.
After sitting in a box under my workbench since February (the terrain, not me!) the scenery finally came out again last week. I used a hotwire to carve the slopes, steps and features I wanted into the Styrofoam. 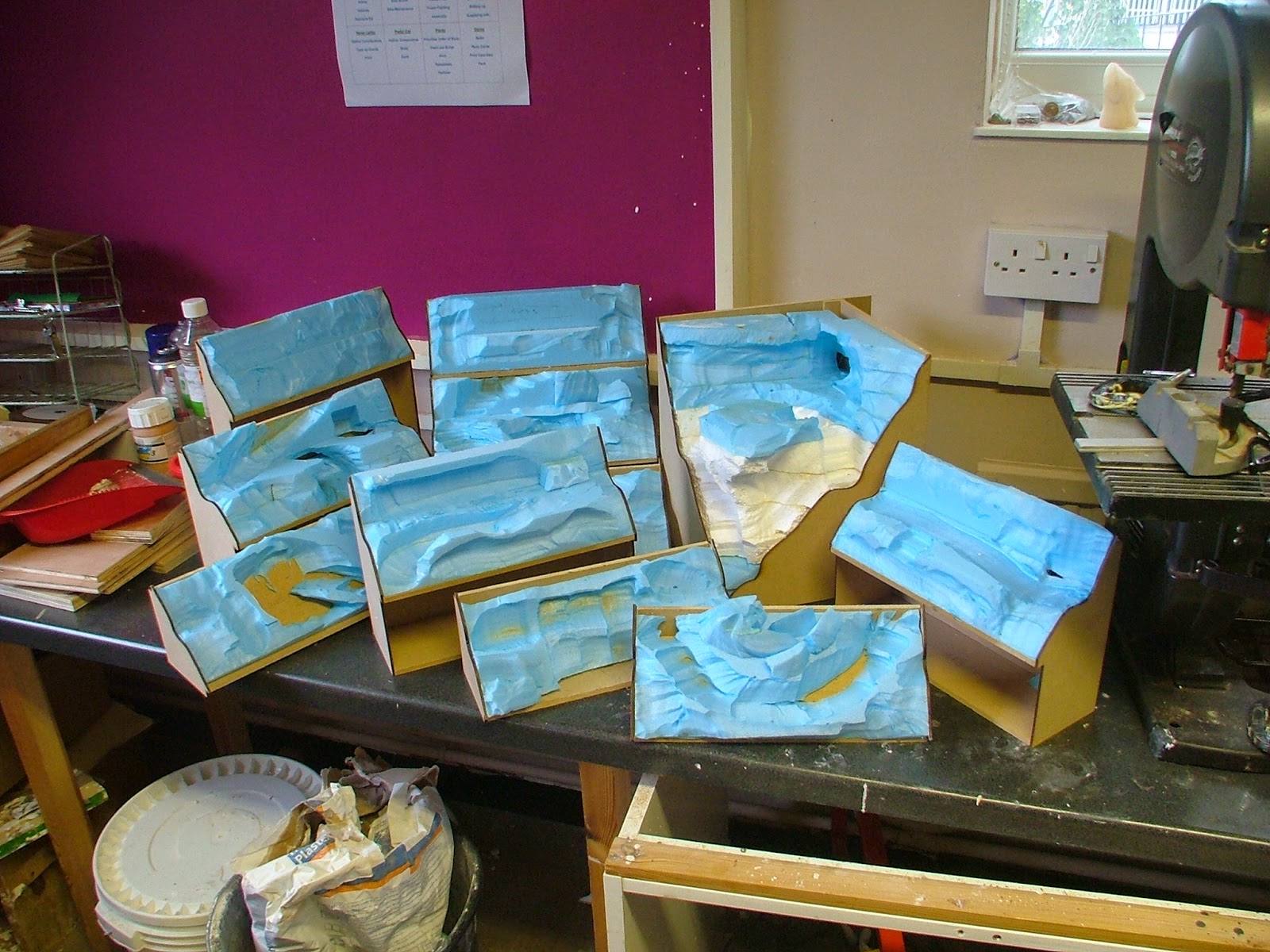 ﻿
The great thing about the hotwire (apart from the cyanide output and lack of poly dust) is that the cut edges already have that rocky texture. Nevertheless, today's task was to glue pieces of real rock on for those nice overhanging boulders, use a ballpoint to draw on the bits of stone wall that would pop up from time to time, stick in bits of real twig for trees and texture with polyfiller. The result: 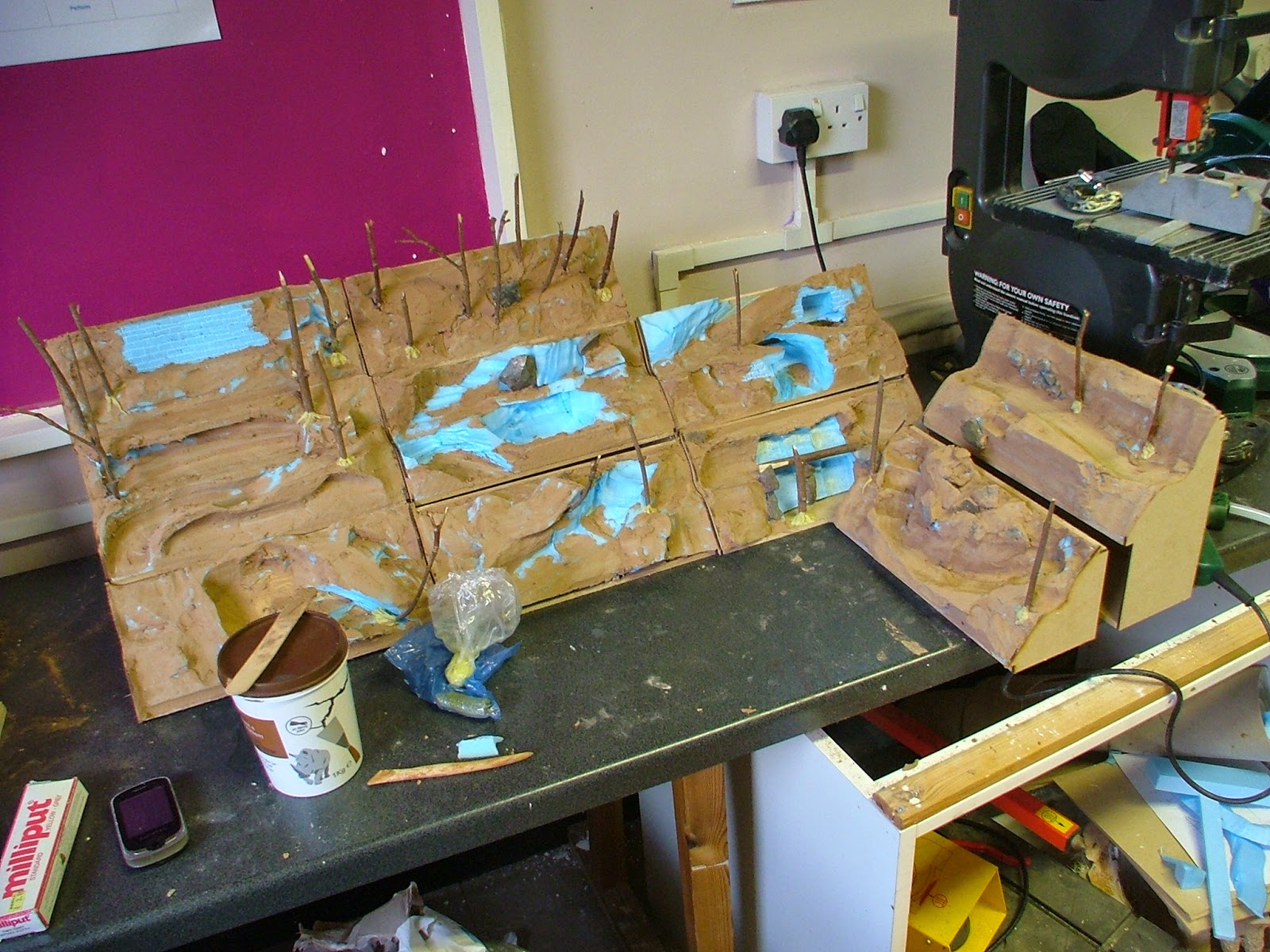 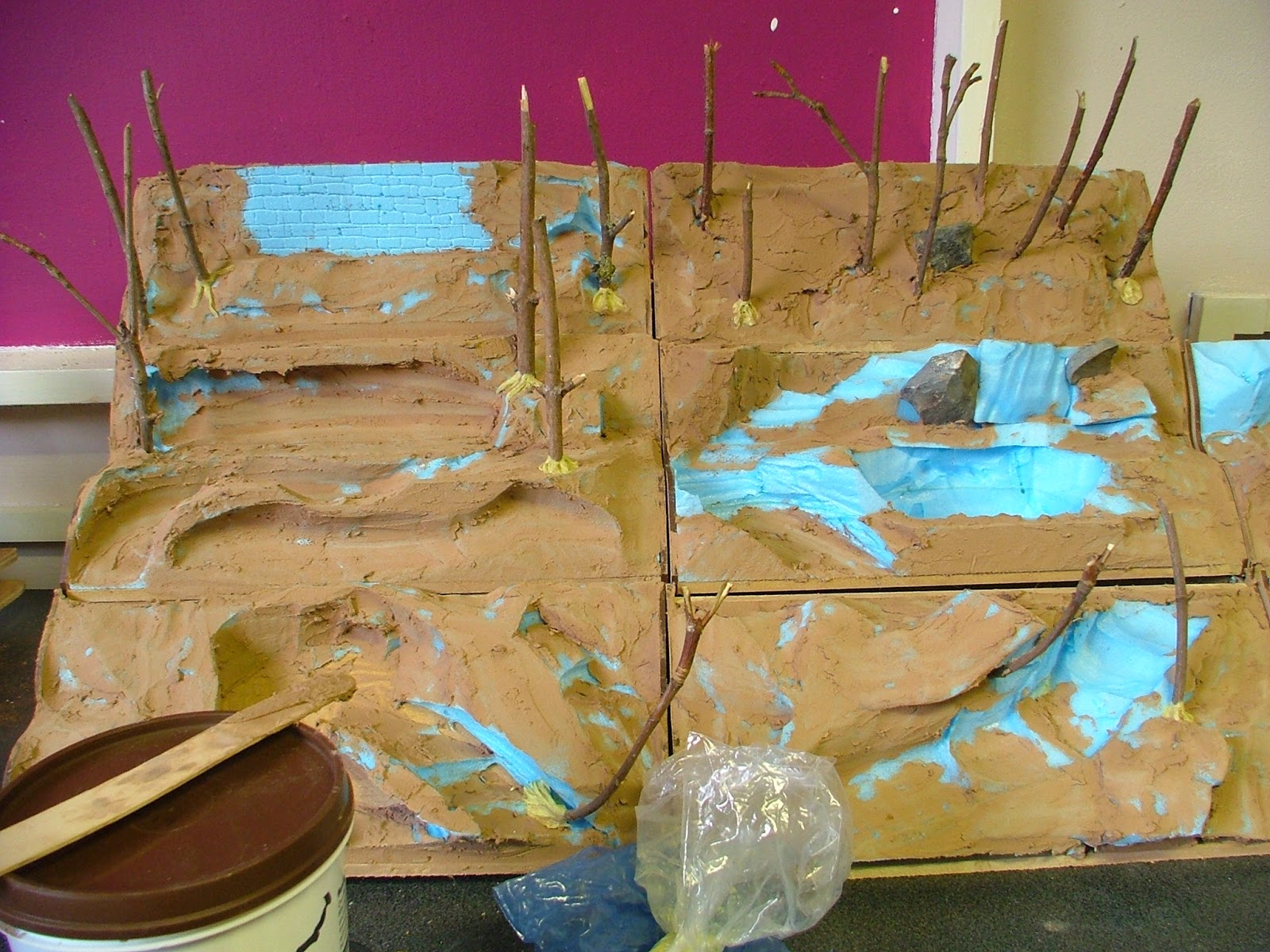 ﻿
The trees at Vassal's are beech trees- straight and slim with fine bark so I haven't gone all sStillmania on them (though I will do some more gnarly ones later). All the same, I have built in roots with Milliput and will be using paper clips stuck into the trunks to build branches onto. Much of the foliage is high above the levels of the banks, so I probably won't give them full canopies, just a smattering of leaves. The next step was to give everything a base coat of dark, earthy/rocky colour. I chose to mix black and brown on the surface to give a blending of different shades. Much of the scenery will be covered in 'earth' and 'leaf litter' in any case so it was only really important to get the rocks about the right colour: 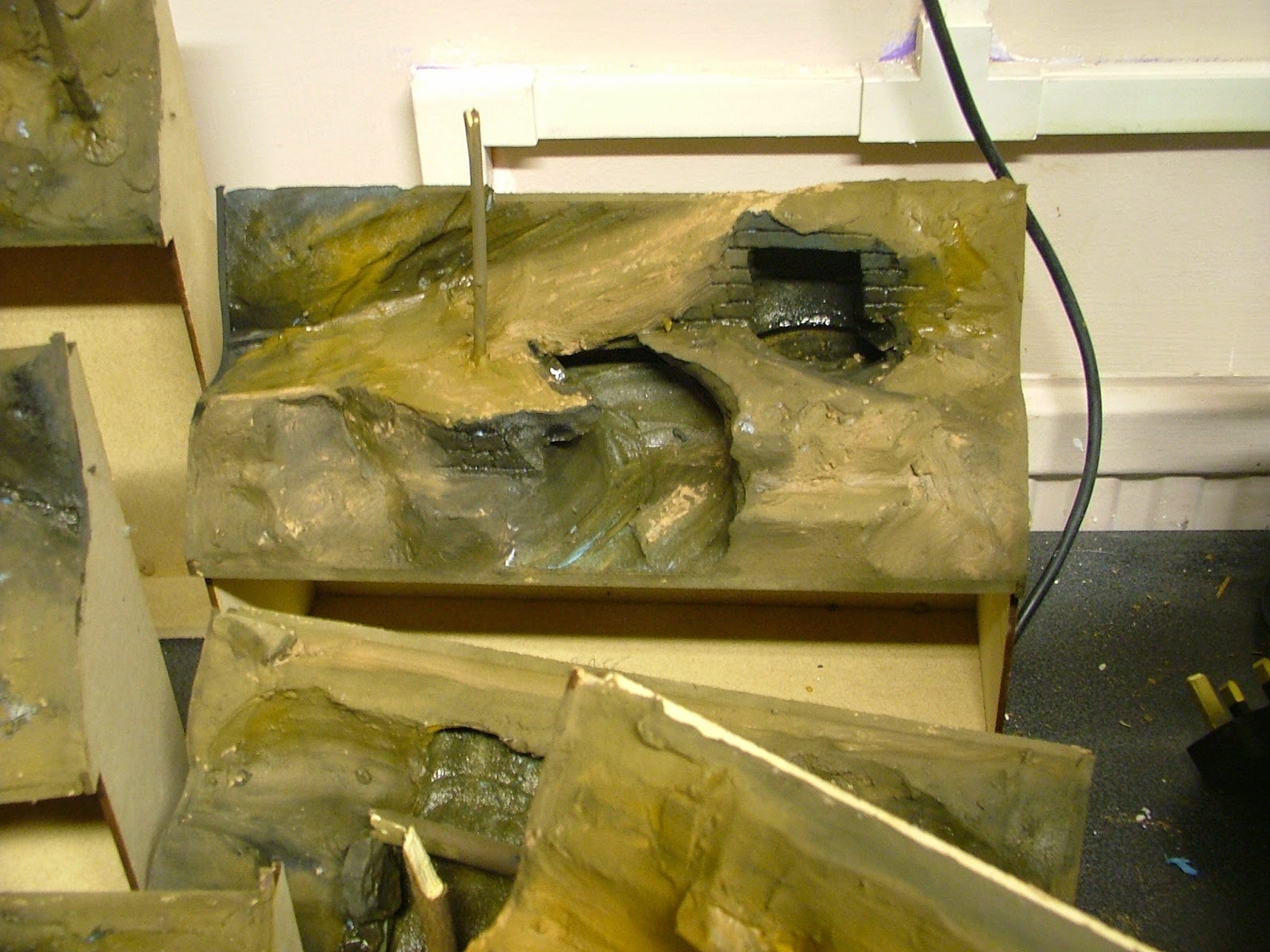 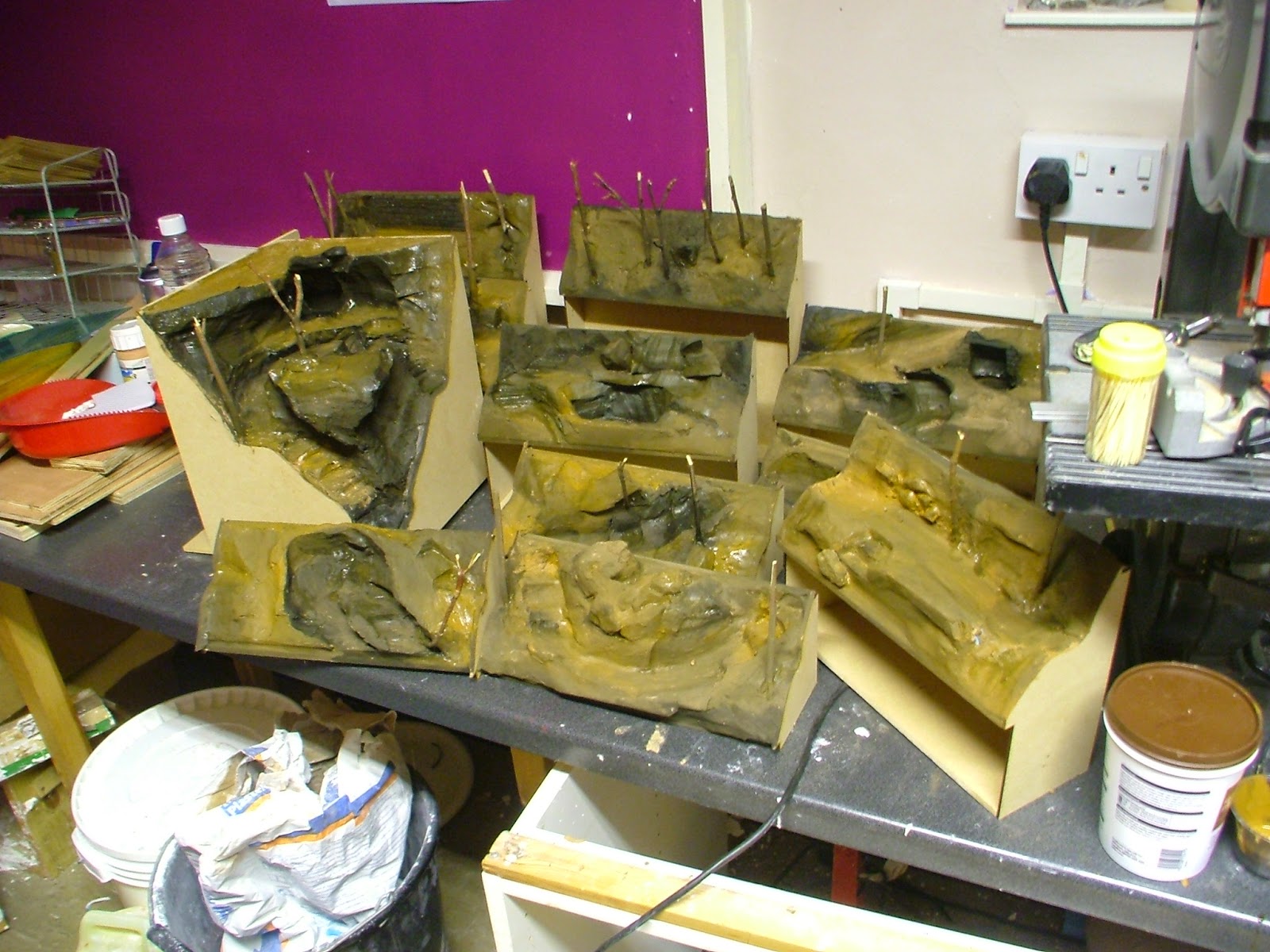 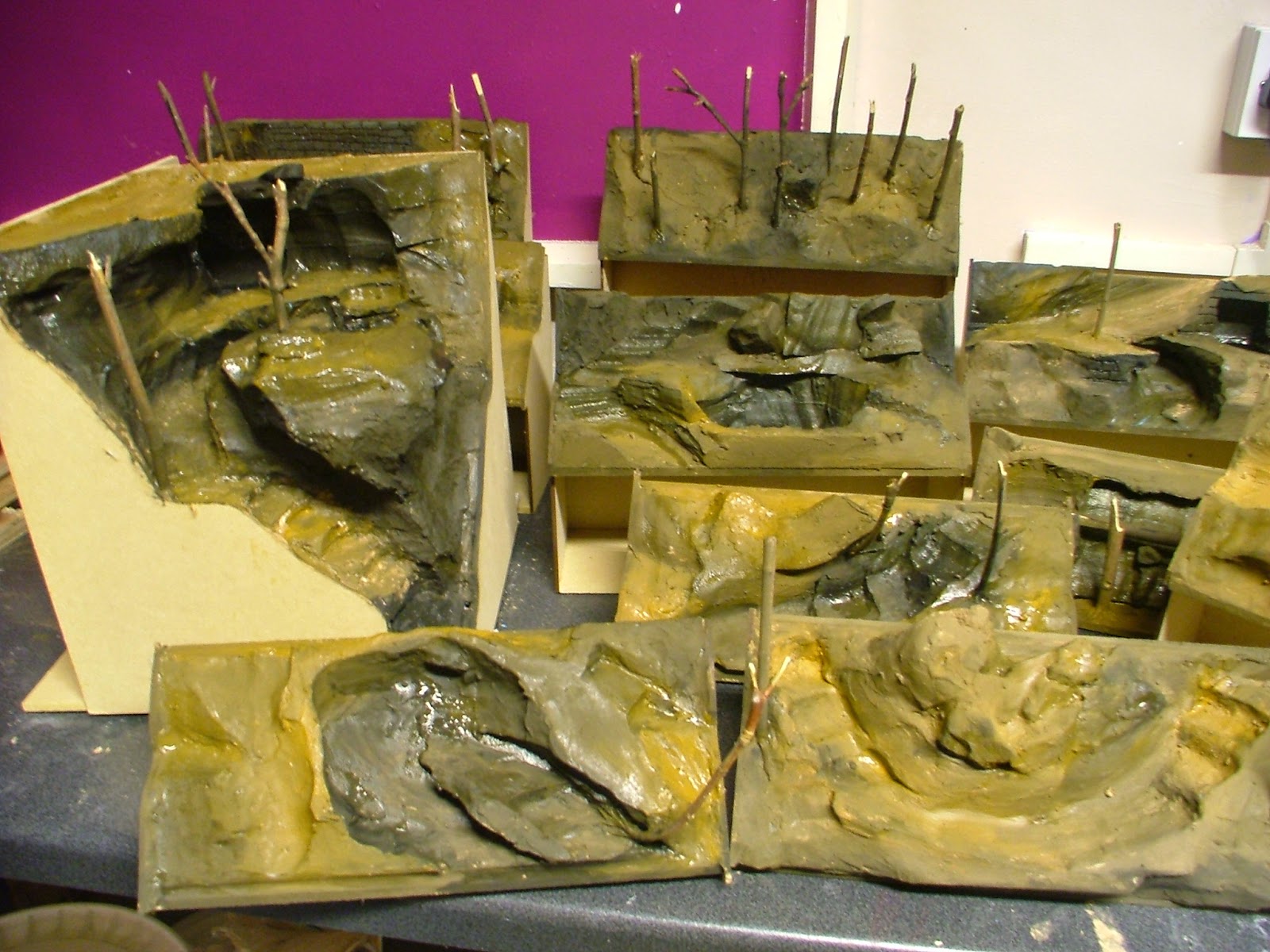 ﻿
The gloss on the picture is just because it wasn't dry, although I probably will use a gloss varnish in places to indicate damp, mossy surfaces. There'll also be some water on some of the modules. So here are some shots of the setup as it currently looks. Hopefully next week I'll get onto the first layers of drybrushing, adding the earth, leaf litter, lichen etc. and making tree branches. 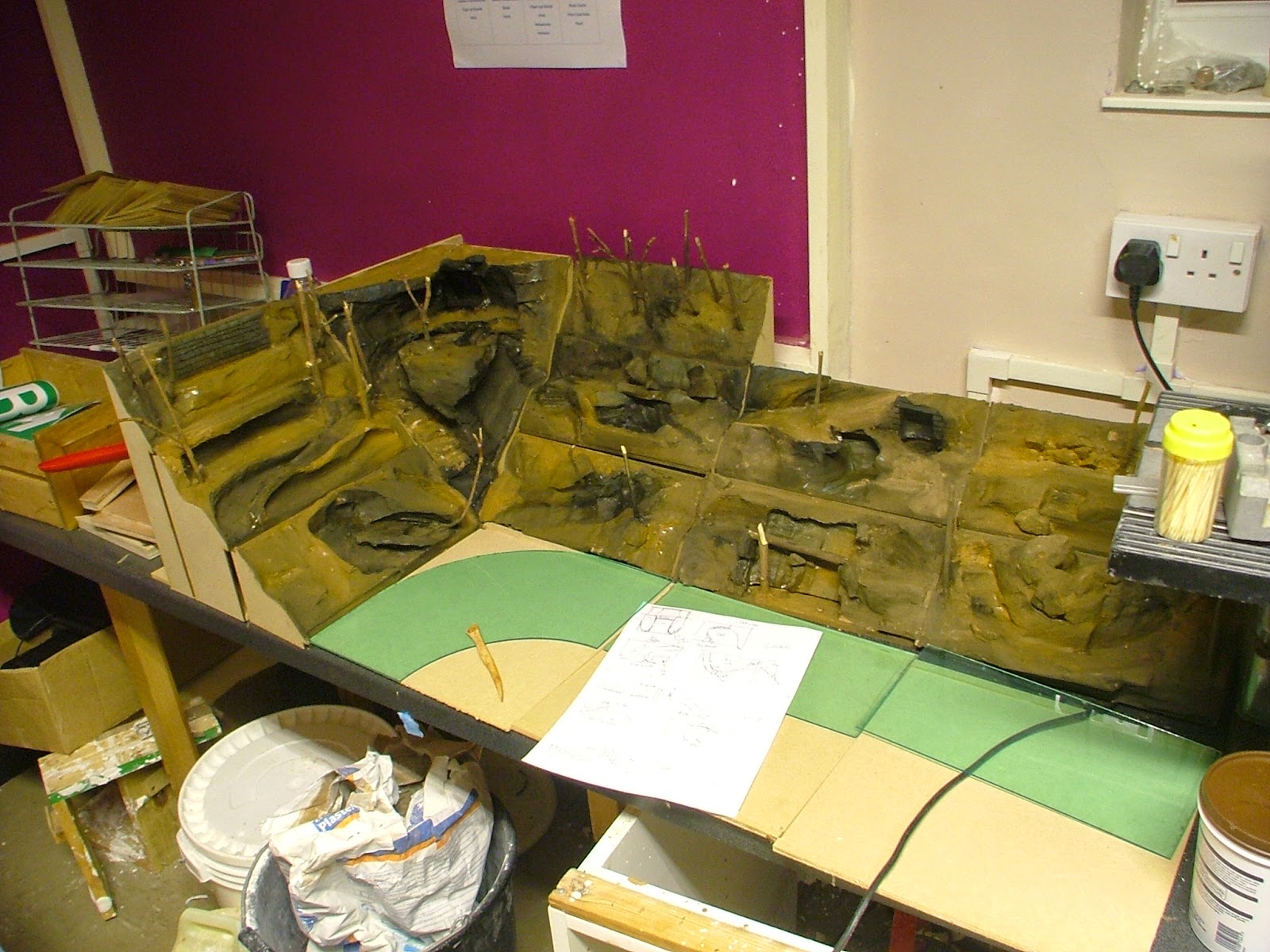 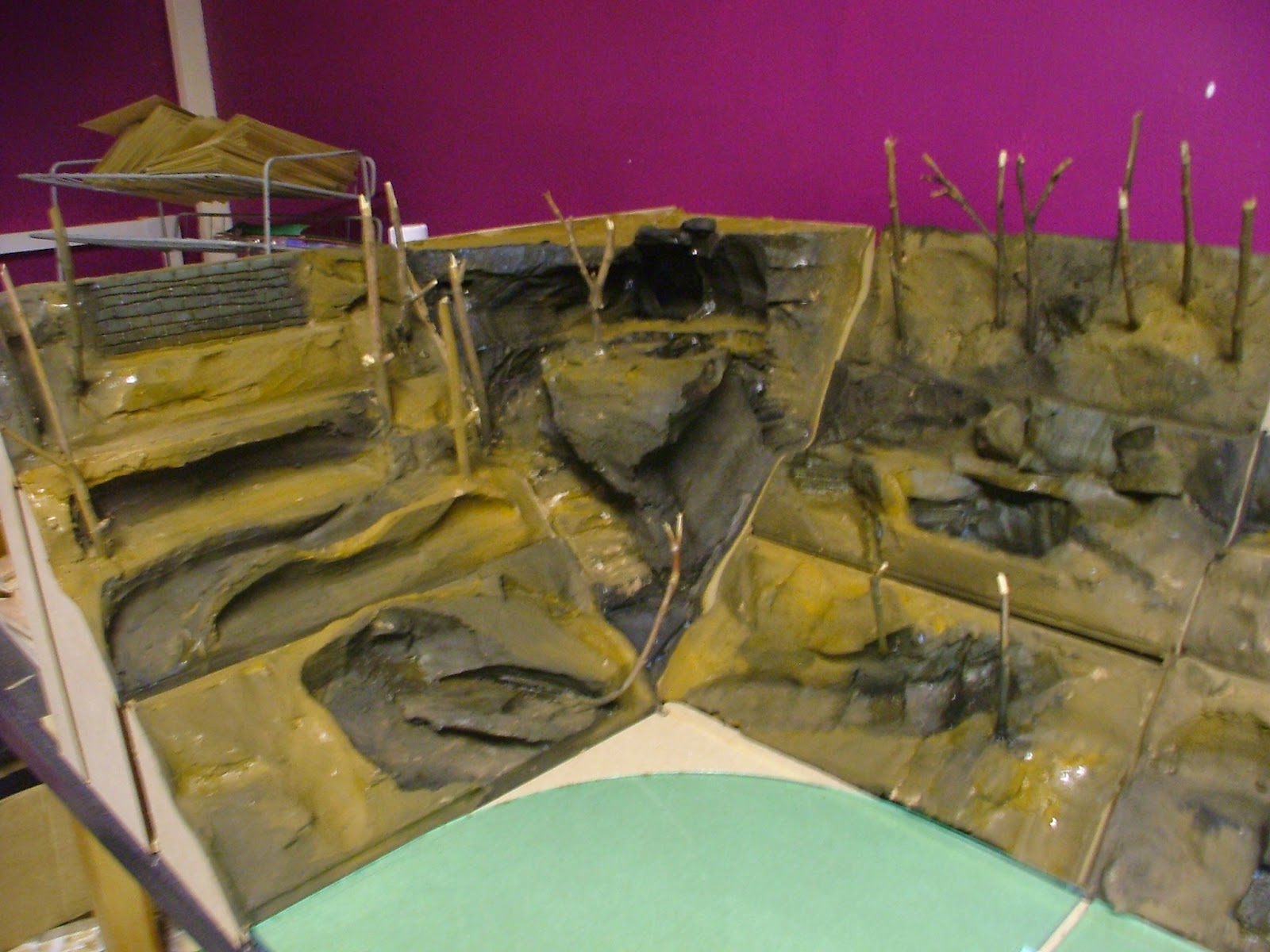 Also hopefully by the time I'm done some master casts will have arrived to photograph in front of it!