Here it is then! The next gallop through binding one of my volumes for the Encyclopaedia Warhammica! But before I pick up with the sewing, remember how I was unsure about what to do with the Heroquest rules last time? Well the solution pretty much made itself apparent when I held the gathered book together for the first time...
﻿ 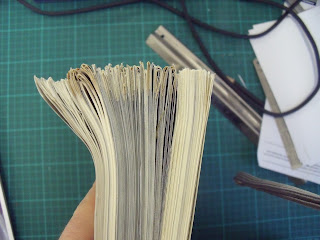 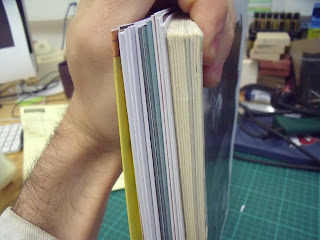 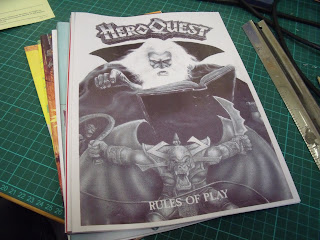 Yup. That's Heroquest rules printed onto A3 in gathers that echo the construction of the Mordheim pages. Now, if I'm going to the effort of using high-quality PDFs to print out Heroquest stuff them I'm going to do EVERYTHING... so first up I've got the European rulebook and American rulebook. Then... 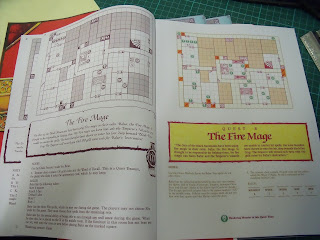 Quest books (Initial, Kellar's Keep and Witch Lord), printed with the European version on one side and the US version on the other. Now I know this lacks something in the design department. Personally I think the European version looks great whereas the US version with its orange and green tones looks a bit naff. However, the US versions are much more challenging quests and for ease of reference it made more sense to me to have them side by side than one after the other. I'll just cover the US page with furniture or a small rulebook until needed! 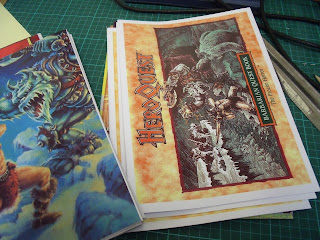 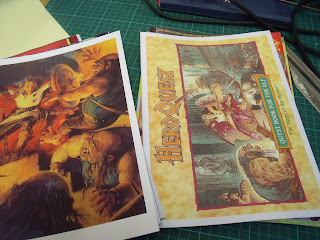 Obviously I need to have these two ridiculously unobtainable quest books in there! 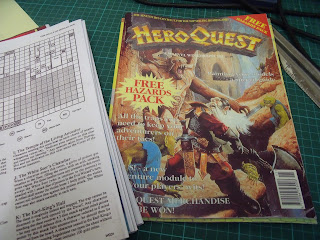 This one I used to have for real... sadly it went along with my original copy of Heroquest when I decided I no longer needed to play it. Boo. 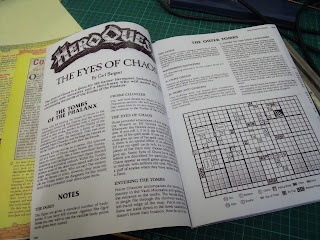 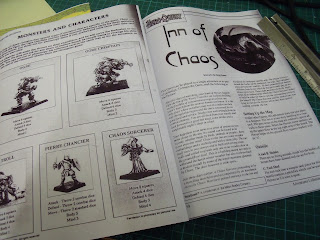 Some bits from magazines... 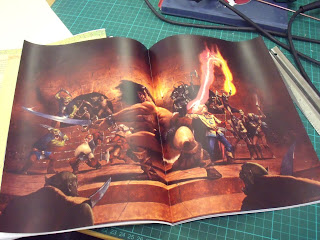 And there was space for a lush double-page Les Edwards print! 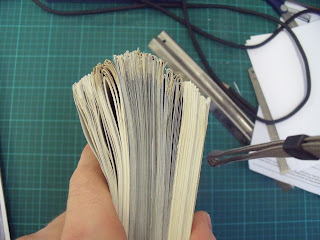 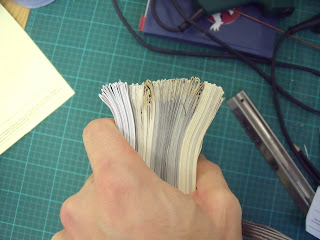 OK, so with the addition of these pages (actually a bit too many, but that's ok) that's evened up the spread of the spine. So on to... 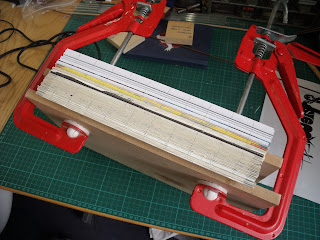 Making holes for sewing. I've left out the Mordheim pages from this block as they already have holes for thread from where they were sewn before. The remainder of the block goes in between two chunks of MDF and clamps. This is my Book Press- cheap and cheerful! 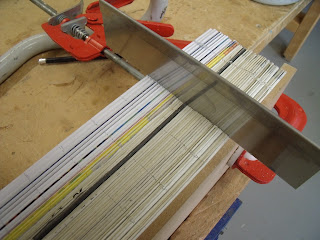 Yup, that is a saw. Now Stephen gave me a massive Jack saw to slice into the volume I bound with him. It worked great, surprisingly, but since I am a modelmaker I like to work a bit finer and am using a razor saw to slice thin slits for the thread. 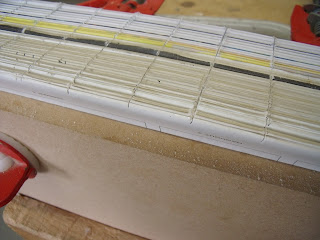 It's surprising how deep you have to cut to reach the centre of gathers!

Sewing is pretty simple. Start off on the outside and go in, out, in, out down the length of the gather. 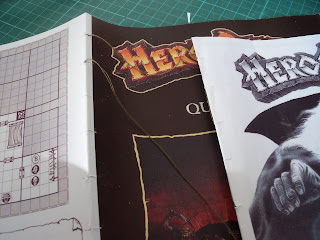 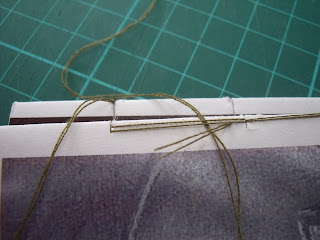 At the other end go back to the gather you started on, catching the needle through the first loop before going on to the third gather. Repeat this process throughout the book, making sure that any joins in the thread are on the outside of the spine. 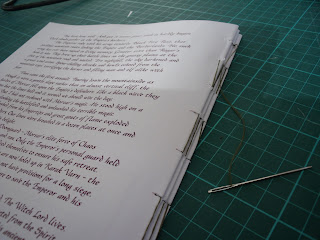 Now, this is important. The gap you want between gathers is a couple of millimetres. You need to be able to shape the book by sliding the gathers past each other, but you don't want it floppy as this will make the spine weak.﻿ 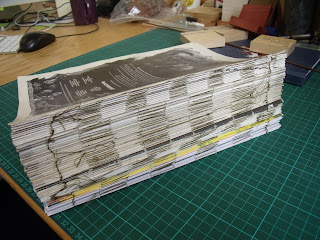 OK, sewn. Took a couple of hours to put this lot together. You can see the threads are not entirely even as in some places the thread tore through the paper so I had to skip holes and the Mordheim block has slightly different hole positions. This doesn't matter so long as the resulting block is tight. 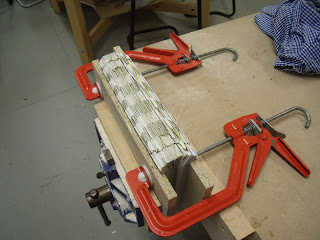 Back in the Book Press for gluing. Now this is the bit that takes a while, trying to get the block so that the top end is neat and level (as this is the side that will be most seen) and the curve of the spine is even and pleasing. This volume was actually very hard to get right since the paper I'd printed the Heroquest rules onto, nicely as it took colour, was very slippery and prone to shifting and messing up the curve. I had to compromise a bit more than I'd like at this stage just to get everything glued so I will try and coax the curve to be a bit more even once the glue is set and I'm putting the leather on. 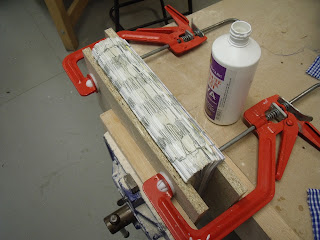 Lots of glue is applied with a  brush, making sure that I fan the pages as I go and stipple glue down between the gathers. The Book Press should be holding the block really tight, but there'll be enough flexibility to get a couple of millimetres in with the brush. 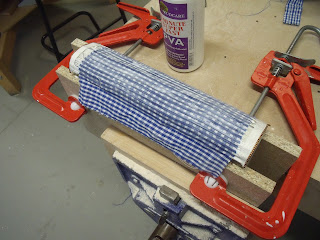 Now a section of shirt fabric is glued across to form the hinge. The fabric needs to be a bit wider than the spine to allow the boards for the cover to be glued on and a bit narrower than the length of the spine so the headbands can be glued on. The stripes on the shirt fabric are a good guide for getting the spine straight and the fabric needs to be pulled nice and tight across the spine and pressed down thoroughly with fingers and a wooden mixing stick or clean clay tool. 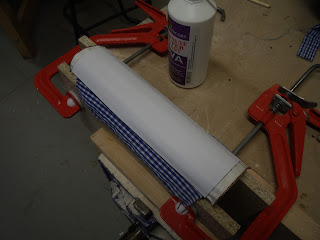 To neaten up the spine and reinforce the hinge a strip of card is glued across. Stephen uses cereal box card with the shiny side sanded so the glue will take. I am using matt Ivory Card which is about the same weight but takes glue easier both sides. The card is rolled gently before gluing down so it takes to the curve of the spine nicely. Rub this down thoroughly but be careful you don't slice your fingers!﻿ 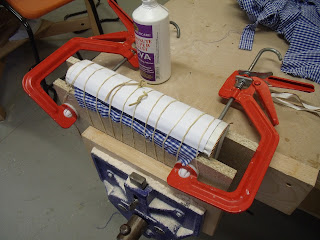 Elastic bands go on to hold everything firm whilst it dries. Then let everything set nice and solid. Once it's dry you can unclamp everything and you should have a recognisable book just lacking covers! Which is where we'll be going next, but I'm still waiting for this to dry so it may be next week... If it's not net week it'll be upon my return from Australia in January!