The ranks of the rank undead have grown a bit. I had a couple of good trades over the last couple of weeks. 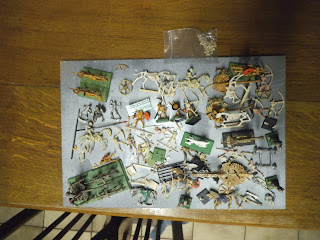 The haul from two generous chaps. One load of old skeleton archers, one mish-mash of various undead bitz. 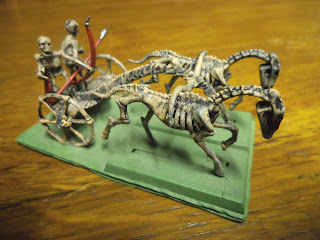 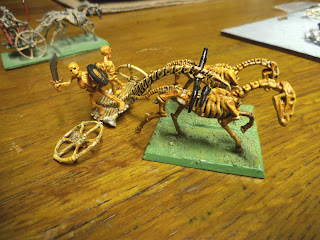 These two chariots I was expecting, but the splendid fellow through in an extra one not in any of the pictures! That's three chariots to add to the Fenryll one (once they've been stripped and fixed up a bit). 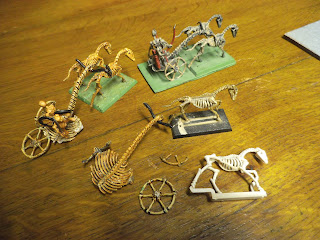 And then there's this one, the Machineries of Destruction chariot (it's much bigger than I thought it was!). Now here's a dilemma. Do I put Mr Longhorn on his actual chariot or keep him with the oxen-pulled Fernyll cart? And if the latter, who gets to ride in the machinery of destruction? 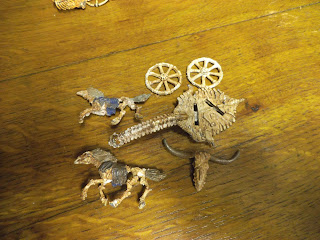 A Citadel skeleton horse. Might become the mount for the Lich Master. The Citadel horses don't have that wild look that the Essex/Iron Claw Bob Olley sculpts have so nice as they are I'd still like to get my hands on a few of the Iron Claw Death Rider horses. 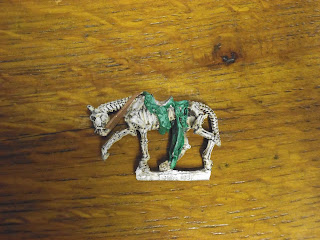 And an incomplete Skull Chukka/Screaming Skull Catapult. Should be able to build something suitable for the rest of the frame. There were also bits for a dozen or so skeleton warriors and five plastic skeleton cavalry, so that takes my infantry, war machine and cavalry contingents up to decent strength.

Nice to have some of the models I had in my first army back, especially the plastic chariot which was my first buy and the skull chukka (which always fell apart when I tried to carry my miniatures to a friend's house so rarely got onto the table!). Also a treat to have the metal chariot which I used to study with great admiration in the 3rd Ed Rulebook. It was OOP before I started gaming and I never seemed to have the money to mail order one. 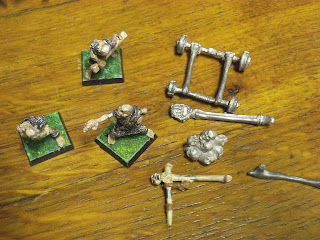 INTO THE DETTOL THEY GOOOOOOOOO......!

Doing pretty well. There are a few models coming which will up this and take me close to my budget- so I'm hoping to pull a bit of a cheat next month to get the outstanding models on my wish list. ;)