Into The Woods par t3: The Fiddler King 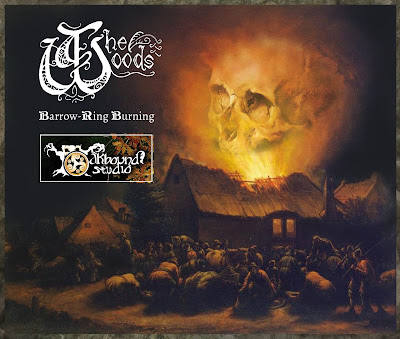 Following on from the last instalment, the adventurers are heading for a sheltered village in the hill country where they hope to return the children they rescued from the woods to their parents. I thought I'd use this opportunity to test out the beginning of the new The Woods campaign book I'm writing, Barrow-Ring Burning, which should be out in December. This shouldn't give too much away... 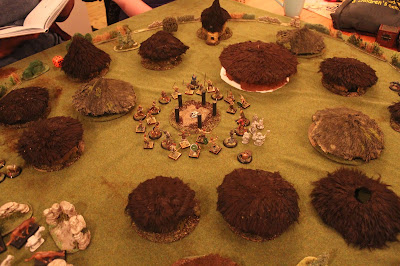 The adventurers arrive at Marbhanam, a village at the foot of the chalk downlands. They enter the settlement to discover that a wake is in progress, the Toisech passed away a few days previously and the village is both grieving and concerned since he left no successor and the important rites of Samhain are approaching. 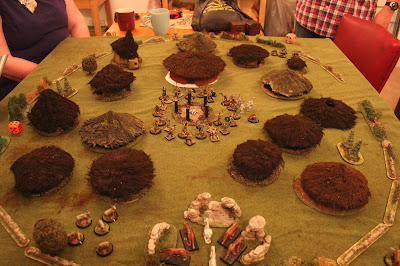 The children are reunited with their parents and our gallant band are invited to stay and enjoy the village's hospitality. Midway through the evening though a sinister figure lurches through the crowd. A stick-thin individual with a harrowed and confused expression and a tall iron crown on his head. Asking around the adventurers discover he is a wandering bard who hasn't been seen for over a year. 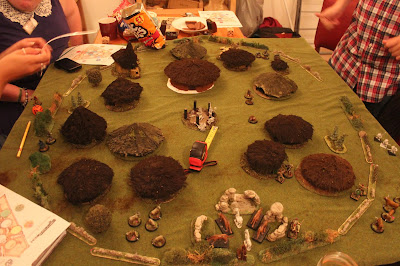 As the night draws on and the villagers begin to drift to their homes only the adventurers and a small group clustered around the musician are left by the fire. Suddenly a pair of stocky figures with evil-looking masks jump from the darkness, grab the bard and drag him into the blackness between the houses. The group panic and spread out in search of the beings who have abducted their colleague. The game is afoot! 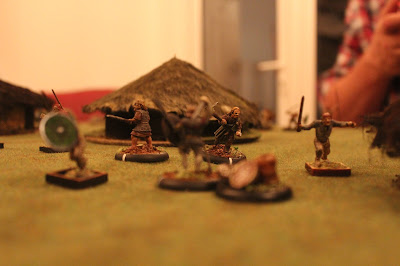 Dashing around in the dark nobody knows where the beings are... except the GM. Three of the villagers are actually these kidnappers but will only be uncovered if the characters can perceive them- that means they're going to need some light. One of the band has a lantern and another is a Geomancer and casts Illuminate to turn himself into a beacon. The band splits into two groups to try and close the two gates to the village, cutting off the abductors' escape. 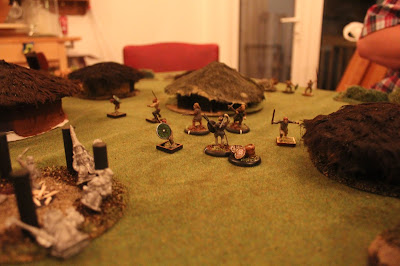 After sounding out most of the villagers (and discovering them to be just that) one group spots a creature moving round by the sheep pen. The other figure is just out of sight, could it be the second kidnapper? 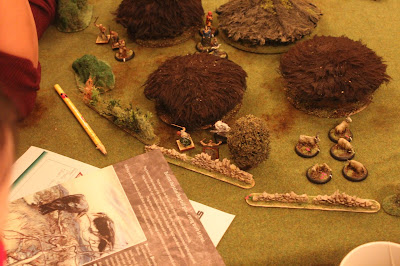 It is, but these beings are deadly when cornered and easily dispatch two of the characters (don't worry, they aren't dead just in a deep sleep). The gate now stands undefended and the kidnappers manage to flee out onto the downs with their victim. As the remaining adventurers scour the nearby countryside for signs one of them recovers the iron crown which was dropped during their flight. Hopefully this will give them some clue where to look next... 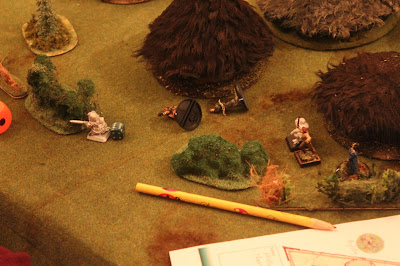 Overall very happy with how the scenario panned out. Distances and numbers of figures worked well but I think I need to downgrade the creatures' profiles a little. They're just a bit too strong at the moment, although it should be hard for the adventurers to win this one. Where the group failed was not making enough use of the villagers dashing around. Any of them could have been ordered to attack the abductors, allowing the characters time to get themselves in a position to take the creatures out. The group did use the Ordering and Coercing rules to good effect to get the other gate closed and guarded but in the panic of uncovering the creatures opted for a knee-jerk charge into combat instead which proved their undoing.

Stay tuned for the next episode!

Into The Woods par t3: The Fiddler King