Shelving, doors and a big hole in the floor!

Over the weekend I managed to crack on with some of the dungeon rooms. 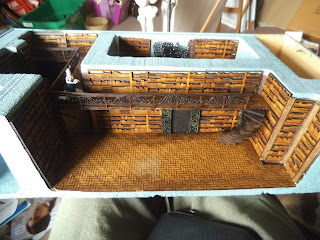 The library is now almost finished, apart from finishing off the stone work, putting the fire and chimney in the inner sanctum and picking out a few more coloured books. 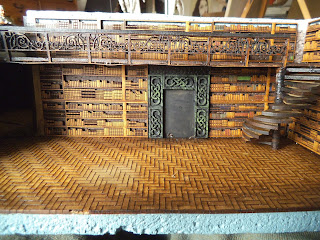 The staircase was a pain in the backside to assemble and the cause of much swearing and cursing! It seemed once it got beyond about 40mm high any further layers just wouldn't stick. In the end I used superglue rather than pva to finish it and once it was in place liberally coated the pillar with glue. It seems to have held. 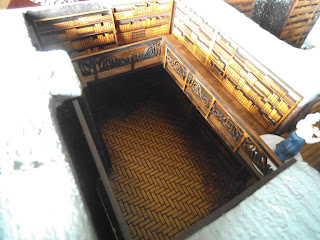 The edges of the floor and the balcony I washed with woodstain to darken them. There's a doorway hidden in the top left, but will the adventurers notice it in the gloomy corner of the library? Here's a shot with the removable side panel attached. I've yet to paint the big doorway and add the free-standing shelves to either side of it. 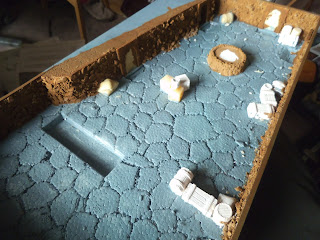 Next up, the ramparts/courtyard. The idea is to have an open space to serve either as an entrance/exit from the dungeon or so adventurers can get their bearings in the labyrinthine tunnels. Lots of barrels and sacks strewn across here, a trough and a well for water as well as numerous doorways leading back into the caverns. 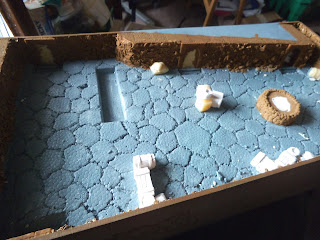 The walls were coated in PVA, had lots of cat litter pressed onto them and then a coating of paint and PVA to seal them before drybrushing. The floor still needs some washing, drybrushing and piles of scatter/gravel across it to break up the surface. I liked the bobbled polystyrene texture, so haven't disguised it with a textured paint, but it does need varying across this sized area.﻿ 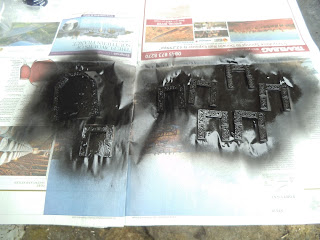 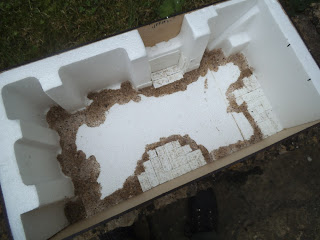 And the next big room. The idea for this one is an underground lake or cistern. I started off by applying my resin cast tiles to the areas in front of the doorways, giving the impression of the remains of a richly tiled room. 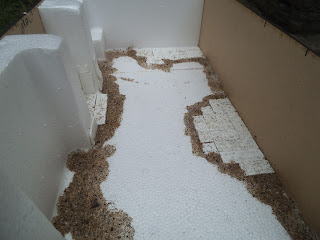 Around these I painted pva and applied liberal amounts of sand, this would form the boundary of the lake area. 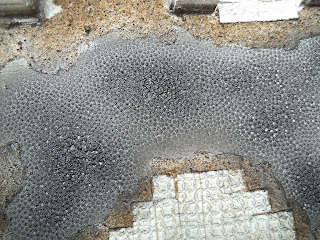 Next I sprayed the exposed polystyrene in the centre with black primer, melting it away. 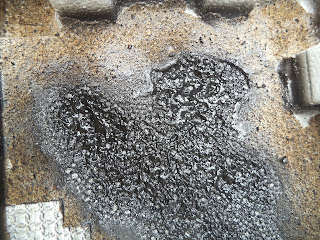 The trick is not to spray so much it eats right through the styrene! Once I was happy with the amount that had been dissolved I mixed some paint and PVA and painted a base colour onto the bed of the lake. This seals the polystyrene to prevent the resin I would pour into it from further eating away the surface (and then pouring out all over the workbench!) Once this was dry I mixed up my clear resin and poured it up to the level of the sand. Then I checked it a few hours later before going to bed, all looked level and clear and not eating away the styrene, all good.

This morning, when I checked, I saw disaster had struck overnight! Instead of a nice, clear lake I had a foamy mass of bubbles! Rock-hard bubblebath foam! Ah... The material I had left in the pot to test curing without touching the pour had set just fine, so it wasn't a problem with the resin, ambient temperature or moisture level. I think what must have happened is that as the resin cured its exothermic reaction caused the styrene to emit gas, which managed to get through the layers of paint and glue and bubble up through the resin. Not the effect I was looking for! I did have an idea on the way into work this morning however, I'll have to have another look when I get home. It might be that this unexpected issue has prompted a whole new aspect to the relationship between the gnomes and goblins who live in this mountain! 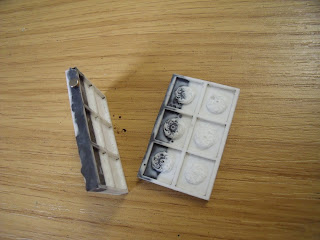 The door castings have been much more successful. The dark strip on these is where I have poured resin with an iron filler powder into the mould. This is magnetic (see small magnet stuck to left door) and with magnets set into the door frames on the dungeon boards this will provide my magical hinge solution. Now I just need to order a shed load more magnets!

Shelving, doors and a big hole in the floor!