I'm looking for some help today, would you mind giving me your opinion on a tricky dilemma? 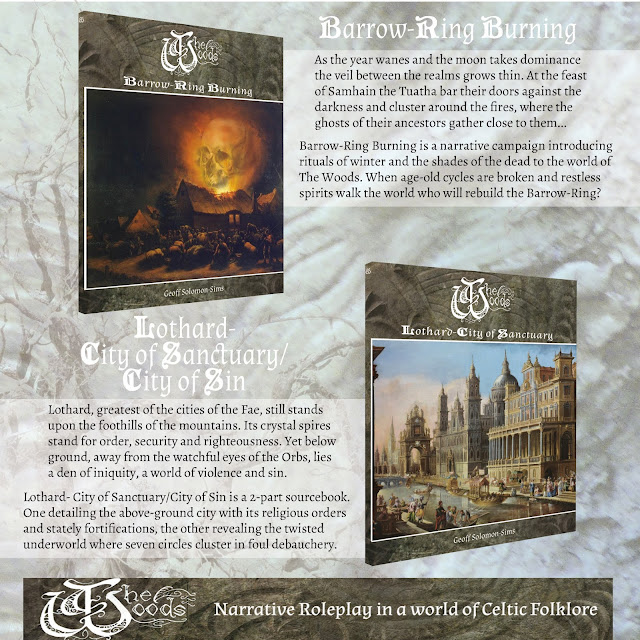 My ambitious plan is to release two sourcebooks a year, one a large, hardback release (Secrets of Shandisholm this year) the other a thinner supplement with either a narrative campaign or new skills/traits/action/items tables in but largely background either way.

I have two part-developed ideas for this winter's release, which one of these would you like to see?

Barrow-Ring Burning is a tale about neglect of ancient customs and threat from a shady... realm. It covers Tuatha burial customs, the hidden underworld locked by the Fae whose chains are beginning to fall away and the rituals of the year danced by the Boggarts and the Phooka which keep the Mortal Realm in balance.


Lothard is a 2-part sourcebook (both in one volume) outlining the strange dualism of the most advanced Tuatha settlement in the Mortal Realm. Above ground the inhabitants of Lothard are formed into religious orders and practice a disciplined life, offering refuge to the lost and wronged and seeking to do what is right and just. Below ground the city's inhabitants revel in labyrynthine caverns which spiral through seven circles into the heart of the mountain where gross rites are performed in the name of sensation.

Opinions and comments very much welcome and sought-after! Thanks.