I've been throwing a bit more of my Undead horde budget around now the new month is here, so here's a quick overview of my purchases. 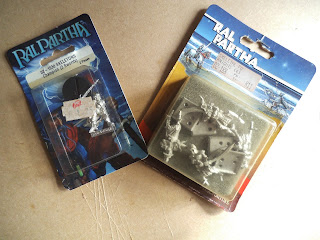 I was buying from Spirit Games as somebody told me they were a UK stockist for RAFM (they are, but seemingly only the Cthulhu stuff). Whilst browsing the site I spotted they had a load of older miniatures available, including these sets from Ral Partha. Now a Ral Partha order is still very much on the cards (Zomber Dragon!) but RP only sell these skeletons with swords separately now, so since I was buying anyway I thought I'd﻿ pick up a pack in authentic vintage blister. :) The skeleton champion with two swords I can't see on the current RPE site. 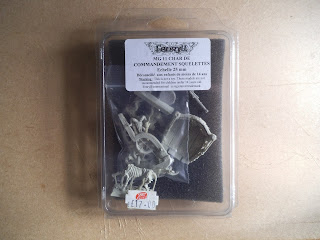 They also had a pretty 'Skeleton Command Chariot' from Fenryll. Having not bought Fenryll before I wasn't expecting resin, but no big problem. The details are crisp and nice and with the oxen drawing it this will make a great chariot for by ox-headed skeleton champion. Quite a lot of cleaning up to do which is a shame and the oxen have very chunky bases which I'll have to disguise somehow. 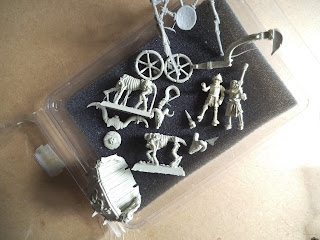 Now this is the find I was most excited about. Not in my budget (which has probably drifted somewhat!) but they had to join the army when I saw Spirit Games still had some because I had these models in my original Undead force: 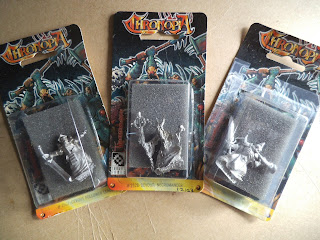 Chronopia Devouts, including that amazing ram-headed Liche/Necromancer. I remember fondly the little hobby shop down in Devon I bought these from whilst on a holiday with my parents. I think we went back 3 times on rainy afternoons that week! The beefy armoured models always looked a bit odd leading a unit of skinny, bare skeletons, but this time round they'll be in Krell's Undead Chaos horde and fit in just perfectly. Now, do I try to replicate the colour scheme I originally painted them in, or go with something different? Hmm.... and yes, when I tore open the blisters I did savour the heady waft of air from 1997! 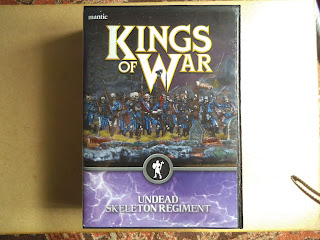 And now, a purchase not from Spirit Games. A Mantic Skeleton Regiment to fill out the ranks. As Chico said, these guys have a definite old-school vibe to them. They're dressed in tatters and remnants of armour which suits my theme perfectly. Not perhaps as flexible as the original Citadel plastic skellies, there are 10 bodies with separate arms and heads and 10 which are just 2-part models, but they should provide enough variation not to look odd when scattered through my units. Anyway, in a mass of skeletons who's going to notice a few duplicates? 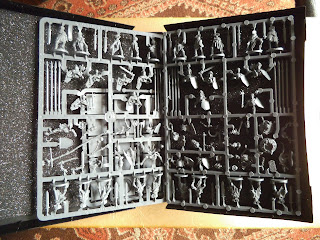 Despite Spending £7.50 on the 3 Chronopia figures (well worth it) the Mantic Skeleton Horde has kept the per-unit cost down!