Having done the Blood Bowl team there's been slow progress on ships this week. Time to post some pics of some that have been kicking around for a while now: 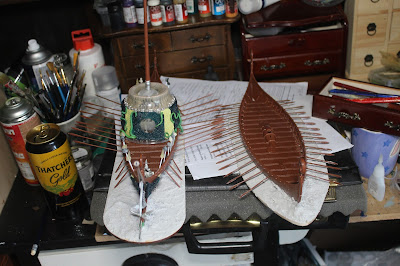 Back in December Amazon had a sale on these Revell 1:50 Viking Ships, so I got two, planning to use them as raiding vessels for my Fimir. In the WFRP fluff the Fimir travel in black longships. In flicking through an old White Dwarf though I came across Slaaneshi Hellrammers from Man O War and decided that I needed to turn a longship into one. The ship on the right is for the Fimir, that on the left my reinterpretation of the Hellrammer. 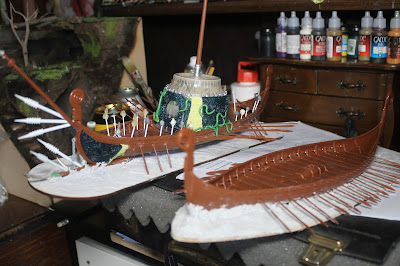 Rather than go massive spike I thought a number of spiky protrusions would scale better on a Warhammer scale ram. The Man O War ship has sails and oars so I've kept both, whereas the Fimir ship has lost the mast (it will be replaced with... something else). I've used a pudding tub, some milliput and plastic bits discarded from the Nurglitch to create the 'house' in the centre of the deck. The sides have been lined with heads on spikes and I've been using the old (though recently discovered by me) comb technique to make tentacles. 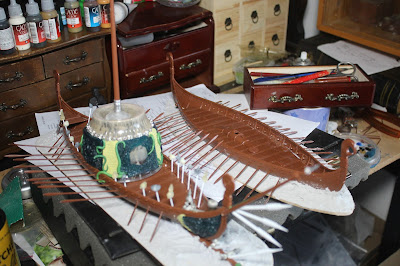 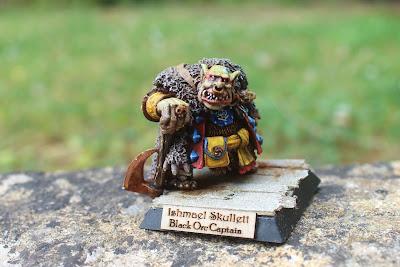 I also realised I neglected to put up any close ups of Captain Skullett of the Nurglitch, so here are a number showing him in all his Orcy glory. He's a Foundry giant orc by Kev Adams, and has all the qualities you'd expect, he weighs a ton! There'll be a couple of attendant snotlings scurrying around his feet if I have time.