Last week's painting schedule ahead of BOYL 2015 was my Dark Elf Blood Bowl Team, the Black Forest Chateaus. I've never played Blood Bowl so this team has been pulled together by using random figures I was unlikely to use for anything else- Dark Elves and a handful of Dark Eldar Wytches. 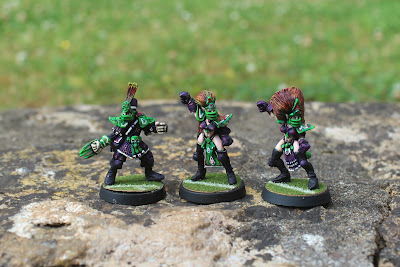 Captain and two Witch Elves, denoted by their face guards. The captain's fist spikes are from a Wargods of Aegyptus Basti warlord 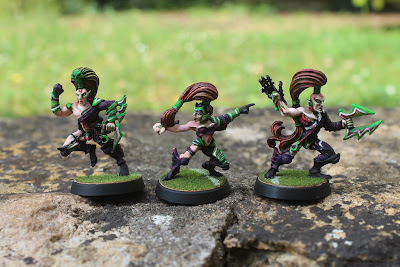 Two runners and a line elf (centre). I've had the Wytches for a long time and always thought they looked like chunky, goofy, nasty sculpts. Surprisingly they actually painted pretty nicely and the poses fit the team really well. There's more detail on them than there looks at first. The Line Elf's pointing hand is from a plastic Phoenix Guard. 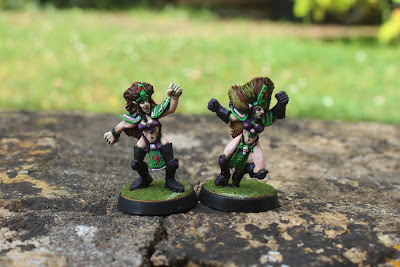 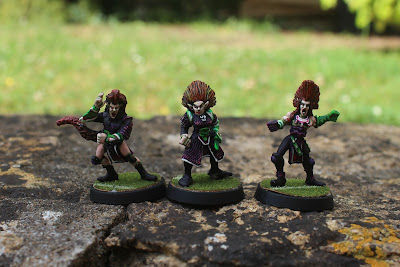 Five more Line Elves. The Witches and Wardancers are posed pretty well for Blood Bowl, just needed to remove their weapons and green stuff the tops and bottoms of their fists to detail the fingers. The old Dark Elf warrioress is more, um, modestly dressed than most of the team but looks like she means business. 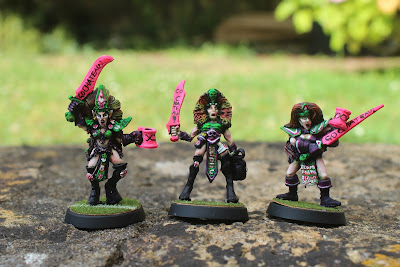 Apparently we can pick from a Star Player or an Apothecary and two Bloodweiser Babes. I've opted for the latter, with promotional foam weaponry of course. What? They're not foam? ;) The tankards are from the Oakbound Games 'The Woods' accessories pack.


﻿
Pretty happy with how the paint jobs have turned out, they're just missing their name tags and coloured bands for ease of identifying their positions. How the team will work out on the day we've yet to see! I might have to play a few practice matches before the end of July...