Kicking up a fuss: Some thoughts of Crowd Funding

I am a big fan of Kickstarter and other crowd funding platforms. Just under a year ago I ran Oakbound's first Kickstarter for The Woods miniatures and we were delighted with our almost 150% funding. Through the process we learnt a great deal about how the platform works, what goes down well and what doesn't and what is reasonable to expect from crowd funding. This set of anthropomorphic animal minis are beautifully sculpted, highly detailed and full of great character. As a fan of Brian Jacques' Redwall series I couldn't pass up the chance to have these guys in my collection. Their Kickstarter was almost 400% funded, not surprising given the quality of the miniatures, but also a testament to how they went about it. There were regular updates throughout the campaign and after it, with plenty of thanks for backers, but it was the nature of the updates that were really special. These weren't just "we're doing really well" updates, they were photo tutorials on sculpting, hints and tips on character design, a glimpse at the game development, insights into the process of having castings taken. They were updates that would inspire others to have a go... and that's what Kickstarter's about. It's a way of giving individuals and small companies a chance to have a go at something they wouldn't have the capital for otherwise. It's about cultivating imagination and ideas and freeing entrepreneurial spirit from the tie of finding rich backers to give greater wealth to.

But something else happened yesterday.

I've had my eye on the Modular Underground project for many months now. Yes, it's digitally sculpted (something I'm not usually a fan of), but the quality looks good and the design is great. So I was very excited when their Kickstarter finally went live and jumped in with an early bird pledge for two sets. 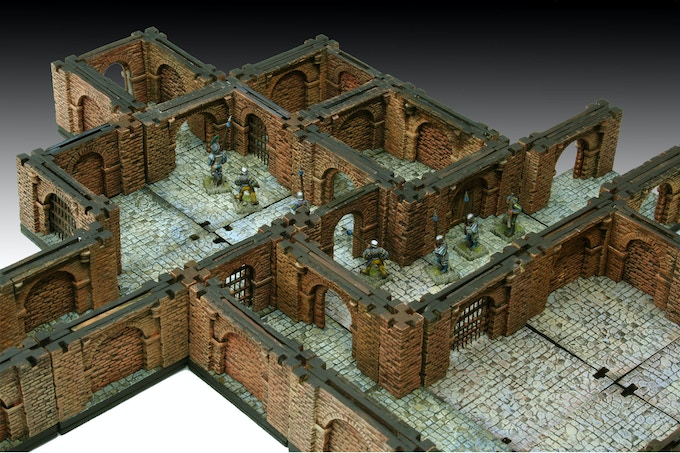 With 20 days to go yesterday they were following typical Kickstarter form of being 50% funded and it looked promising that the project would go ahead. I have been reposting it in places where I thought others would be interested and promoting it as I think it looks like good value and excellent quality. Then this email arrived:

"As all our backers we were expecting a bigger success of our product from the early days of this Kickstarter. This hypothesis led us to plan the Kickstarter in its actual form. To continue this crowdfunding campaign at this stage would mean to waste a wonderful idea. For this reason we have decided to cancel this project and to allow our loyal backers to invest their funds in other projects, trusting that the same backers will still be interested in our project in the future."

What does this mean? They looked on track given the record of previous campaigns. My only guess is that they were expecting to run a Mantic-style 'preorder', hitting their target and exceeding it the instant the campaign launched. But this is exactly what Kickstarter is NOT. You work out what you need to make the project go ahead in a way that is worthwhile to you. You promote it and give people the chance to vote with their wallets whether they want to support the idea or not and at the end of the period you've either done it or it's a learning experience and you need to go away and research what you need to change to make the idea better. Ending a project a third of the way in because you've only got halfway to being funded goes against the spirit of the thing. "All our backers" suggests that they already have stakeholders who wanted a larger return than they were seeing on this project and pulled the plug. Needless to say I am very disappointed. I am sure that with the last-week funding spurt that is typical of these projects they would have made their goal, but their email suggests they wanted a "bigger success" than just meeting the goal. As I've implied, there's nothing wrong with wanting a successful campaign, but in my opinion 'success' just means getting the idea funded and project off the ground rather than making a huge profit. The tone of the email seems to me to be saying "We wanted to make more money out of this than it looks like we're going to so we're going to scrap the project, it's not worth doing". That's something that should be factored into your funding goal if that's what you want.

It could be that they plan to run another Kickstarter at a later point, perhaps with better promotion, more informative updates, stretch goals and all the other things that might have encouraged more backers, but I will hesitate to pitch into that one having seen the way this one has ended.

Crowd funding is, as I've said, an amazing way of getting projects out there which would otherwise not have the money to go into production. It's a chance for people to see their dreams come to life, and more than that- to see them come to life because other people had something of the same dream and wanted to help make it a reality. To see it as merely a glorified pre-order system devalues this. To end on a positive note, here are two Kickstarter projects in the pipeline I'm very excited about:

Following on from 'Space Riders' (or should that have been Raiders?), Diego has been working with a bunch of talented chaotics devising new taints and terrors for the Pantheon of chaos.

It's great to see a handful of talented sculptors, artists and modellers being able to step aside from commission work and commit to having their own visions made flesh, erm, putty.

Some of these sculpts have been around for over a year now, but the project has grown in ambition and scale, which is only a good thing as far as I'm concerned! Tim's not stranger to the sculpting world having been with Citadel in the 80s and more recently worked for Reaper and Wargames Foundry. What's been great about Diehard is the advice, tips and process shots they're been so willing to share with sculpting Noobs like myself. It's not just "look at the cool things we're doing, go buy them when they come out", it's very much "look at the cool things we're doing, here's how we do it, why don't you give it a try?". Very much the participatory spirit that Kickstarter does so well to promote.

Kicking up a fuss: Some thoughts of Crowd Funding