Ok so it's been a while since we looked at how the Encylopaedia Warhammica is coming along.

Well, I was hoping to have volume 3 (the one I'm starting with, confusing no?) finished by BOYL ready to bring it and get lots of great autographs. Sadly this is not possible, partly due to the amount of stuff I need to get painted, partly because of my Bookbinding tutor Stephen's availability. Anyhow, I thought it was better not to rush it and to do a good job in August. However I have been busy on volumes 1 and 2.

Volume 1 (Warhammer 1st Ed, Forces for Fantasy, Compendium 1 and 2) I got from original form, through disassembly, cutting and gluing the new gathers, marking, sawing and stitching in 3 and a half hours, which I was very pleased about. Volume 2 has taken somewhat longer. 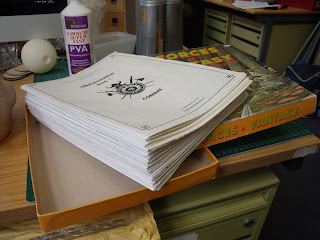 ﻿
The first part of Volume 2 was straightforward. The three volumes of 2nd Edition rules. These were originally magazine stapled so I needed to take them apart and cut and glue the pages to get them into slim enough gathers (collections of folded pages) to sew into the book. This really means a maximum of eight leaves per gather. Fortunately these rulebooks are slim enough that I managed to preserve the centre fold as a gather and simply cut away the first and last thirds to make up three or at most five gathers. That was quite quick. 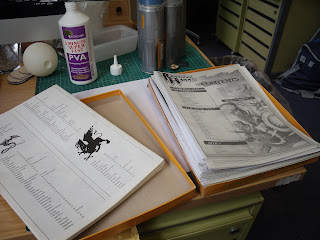 Part two was a bit more time consuming. Not only is Ravening Hordes glued as individual pages into the spine, it is also taller than the rulebooks. So I had to carefully pull the pages out (in bunches intended for a gather each to prevent confusion and getting pages out of sequence) and slice them top and bottom to the same size as the rulebooks. Fortunately there was a fairly generous margin top and bottom so I even got away without trimming off page numbers in most cases. Because they are now individual pages I had to glue a strip of paper down the middle of each pair to collect them into gathers. I had to do this for the 3rd edition volume so am pretty au fait with the technique now but it does mean that the spine ends up almost double the width of the text block with the extra paper. Stephen's creative solution to this is to make the spines curve neatly to prevent the books from looking wedge-shaped. Hopefully you'll get to see that when I come round to putting the spine on. 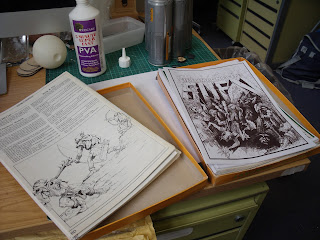 Scenario packs. Fortunately they're quite slim so can go in as they are or with a bit tweaking like the rulebooks. Also needed a trim top and bottom but had decent margins. 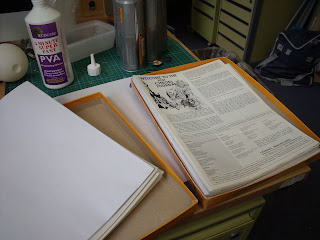 Journals 1, 2, 3 and 4. These were a bit more of a pain. 1 and 2 were significantly larger in page size than the rulebooks so needed trimming along three sides to get them down to the same size. Again, luckily, they mostly have large blank margins so although the odd page number or pit of margin-bursting illustration was trimmed off nothing too vital was lost. They were magazine stapled which cut down on a lot of work. 3 and 4 though? No, they were both too large AND glued into spines so involved the whole gamut of processes, trimming along all 4 sides and gluing into gathers. Thank goodness for broad margins! 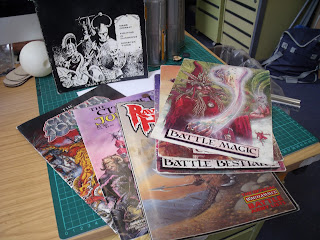 I'm now amassing quite a lot of cardboard covers. Not sure what to do with these yet. Did think they might look nice framed, but one problem with marrying an artist is that wall space tends to be limited... Did also think of using them as endpapers, but that would still only take up two per volume. So creative solutions please! What do I do with my spare covers? Anyone need a replacement for their own dog-eared specimens? ;)

Next step is to mark the spine at regular intervals for the thread spacing, take a tenon saw to it (yes really! You'd be surprised how deep you need to cut to reach the inside fold of an 8-leaf gather!) and start sewing. Maybe by the end of August volumes 1, 2 and 3 will be complete and on my new bookshelf... how exciting.