A few months ago I was gripped by a burning desire to play Heroquest again...
(Having given up my previous set to a friend of a friend in a moment of "I'm an adult now, I won't need to be playing this anymore" insanity I needed to acquire another set, but that's another story.)
... got me wondering, what happened to those Fimir? We don't hear from them anymore. A bit of digging on the web and in my old 3rd ed rulebook and a passion was born. Time to resurrect the ancient race!

At this point I should acknowledge my gratitude to other Fimir enthusiasts out there, Mr Saturday especially has been an inspiration, as has Angry Lawyer, but I decided I wanted my Fimir to go off in a different direction. They had to have the celtic influence, but I wanted to include elements from a film which inspired me to go into prop/character creation all those years ago... The Dark Crystal. Flicking through the pages of an old 'dwarf with a fimir article I was struck by the similarity between these beasties: 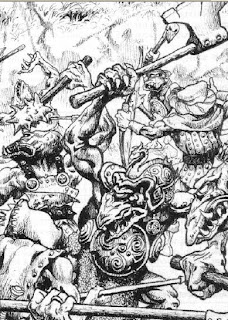 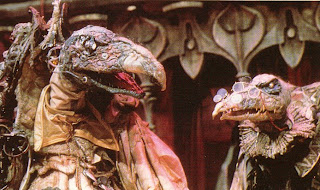 So alongside the figures from celtic mythology I wanted to draw from Henson's masterpiece in creating my figures. Since Fimir (Fimirs if you believe the Heroquest rulebook) are pretty darn pricy (but oddly not too rare) on ebay I decided to sculpt pretty much everything for my army, including a few token figures as a nod to their original sculptor, Nick Bibby.

I've seen the plastic Herqoeuest Fimir used to create some pretty nice armies and good orc conversions, but since they tend to lack the reptilian quality I wanted for my Fimm I decided to go with lizardman conversions/rebuilds for my basic Fimm squads. These would be coupled with some plastic Heroquest figures and a host of human allies and slaves... plus a few wierder beasties.

Rules will be worked out from various sources, including modified 3rd ed stats, comparative stat lines from WHFB 8th ed lists and....

Just as my army had nearly reached completion of the sculpting stage I see 'Storm of Magic' has brought the Fimir back to the (relative) fore... curses! Still, it's only one character for now and at least it means I have a 'games workshop authorised' stat line to give my Dirach! Though I'll be damned if he's having initiative 2!