A look inside Secrets of Shandisholm- part 1: The Tuatha

﻿For our first look inside The Woods: Secrets of Shandisholm let's start at the beginning. Once again I'll get a friend to ask the questions.... 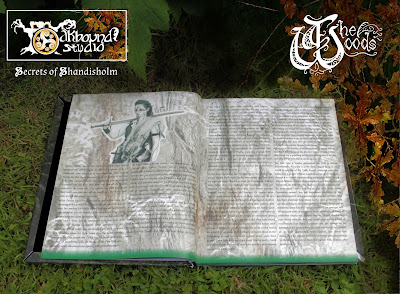 The Tuatha, they're basically humans, right?
Pretty much. They're approximately equivalent to the European people of the Bronze and early Iron Age. They are the original inhabitants of the Mortal Realm and Secrets of Shandisholm is largely about the origins of and reality behind their complex folklore. The book starts with the Tuatha because it made more sense to explain what they believe and understand of the world and then dive behind the surface to expose the real story of their relationships with the Myeri, the Fae and the folk who have been left stranded in the Mortal Realm.

It's a nice sketch of a warrior maiden there.
We were very fortunate to have the amazing Solly Solomon do some character and animal sketches for the book. She actually worked from photographs which we were given permission to use. This one is of Elverynel and was taken by Rebecca Magdalena Photography.

Text looks kinda hard to read.
Yeah, the photo doesn't do it justice. This book is a mock-up using digital printouts and it hasn't photographed very well. Actually the background is very light and the text stands out quite well. 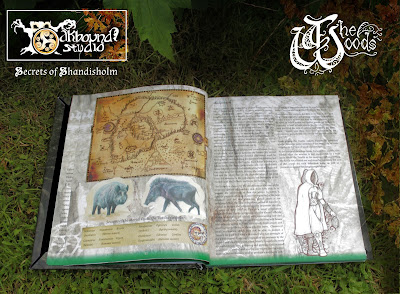 The map shows an area called the Ring Wood and surrounding countryside, I assume that's the setting of the book. What is there around?
The Ring Wood is a dense area of forest in the lowlands of the Mortal Realm. It lies between the Drakkenmere and its fens on one side and the steep highlands on the other. The principle Tuatha settlement is called Shandisholm and gives its name to the entire surrounding region, hence the title. In the centre of the Ring Wood is a grove of ancient trees called the Heart Forest which is a mysterious centre of 'magical' energy. The other side of the Drakkenmere from Shandisholm is Mael Fen where the infamous Marsh Demons live. There are other Tuatha settlements of various kind scattered throughout the wood and the Old Lowland Road cuts across the upper edge on its way into the mountains. The events of the book take place in this region but it's only a small part of the Mortal Realm. We didn't want to try and map the whole thing as it's part of the fun for players coming up with their own sections of the world. 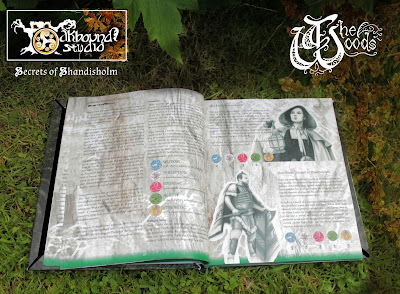 Couple of sample characters?
That's it, yes. Each of the three 'main' races featured in the book (Tuatha, Fae and Myeri) have their own section on creating characters of that race and a couple of sample profiles. The other creature types are listed together in the bestiary and almanac.

What's distinctive about the Tuatha then?
They're very much the standard template. They aren't particularly good at anything (although they'll all have a specialism) but they aren't restricted either. The Tuatha are very much ordinary people thrown into extraordinary situations and coping as best they can.

What's next?
In the next instalment we'll be looking at the Fae, who are a very different matter altogether! As always, any questions leave a comment and I'll try and answer.

A look inside Secrets of Shandisholm- part 1: The Tuatha

Email ThisBlogThis!Share to TwitterShare to FacebookShare to Pinterest
Labels: Oakbound, Secrets of Shandisholm, The Woods