A look inside Secrets of Shandisholm- part 7: Action Tables

Good morning. Thanks to everyone who came and saw us at Attack! Devizes at the weekend, we had some good games and unleashed a lot of terror upon the Mortal Realm! Another look inside the pages of Secrets of Shandisholm today, this time we're talking about Action tables...﻿ 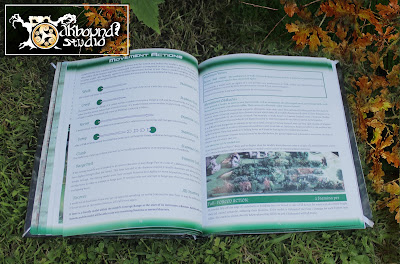 Let's get down to it then, what Actions can I spend my Stamina on?
There are 6 tables of Actions in the book: Movement, Relational, Shooting, Grappling, Instinctive Reactions and Fateweaver Actions. Movement, as you'd expect, covers walking, jumping, climbing, sprinting etc. Relational is to do with interacting with other models and the board, speaking, coercing, investigating, operating machinery (although there's not much in the way of machinery in the lowland forests!). Shooting covers loading, aiming and shooting itself. Grappling is a bit more complicated, there are Grapple Reactions you can make if you see someone charging at you and Grapple Actions you can perform if you win the fight. The better you do in the fight the more options you have. Fateweaver Actions are like spells which can be cast by characters whose profiles list them as Fateweavers. Instinctive Reactions are Actions which can be performed in response to something else happening, for instance being shot at or targeted with a Confuse Fateweaver Action.

Shooting and Grappling must be quite interesting without dice rolls.
Shooting is based on Accuracy, if your Perception is good and you're steady under pressure you have a better chance of hitting the target. This is modified by what else has happened, so your accuracy decreases if you've moved as well, and decreases further if your target is moving fast for example. You can boost your accuracy by performing Aim actions before shooting. Once you've calculated your Shooting Range by following the easy calculator on the Shooting page you measure that distance in inches. If you can reach the target you've hit, otherwise it's a miss. So there's a combination of being able to accurately guess distances and plan ahead so that your Actions and those of the target give you the maximum chance of hitting. Hit models are knocked back and must take an Instinctive Reaction as well as sustaining damage. Being hit by a missile weapon isn't as lethal as being pounded in a Grapple, but it seriously affects your ability to make the most of your next Activation, especially if you've run out of Stamina and have to Fall Prone.

And Grappling?
Grappling is a bit more complicated. Planning the attack is important as if the fight goes badly for you it can get serious very quickly. First you initiate the Grapple. This is essentially a charge, but if your opponent can see you coming they get to react which can make a substantial difference to the outcome of the fight- so a stealthy approach is often best. Next you calculate Grapple score. This is based on the model's Finesse (Strength plus Agility) but is modified by circumstances, for instance if a model's Centre Front Line isn't touching their opponent's base it means their opponent has managed to move to the side of them (Wide Spacing them) and their ability to defend and strike back is reduced. Each model's remaining Stamina is added to their Grapple score as all efforts are committed to fighting for their lives and if the initiating model managed to launch their attack unseen they can add the Stamina spent initiating to their score as well. Again, there's a handy calculator for working this out. The model with the highest Grapple score wins and the amount they win by determines how many of the Grapple Actions they can choose from. These include hitting your opponent and knocking them to floor, but also more subtle tactical moves like pushing them backwards, Wide Spacing them and using the advantage to escape from the fight. Different weapons and skills also give special abilities in a fight or reduce the cost of Grapple Actions. For example a model with a spear can keep an opponent at a 1" distance, preventing their blows from landing as long as they keep winning rounds of combat. 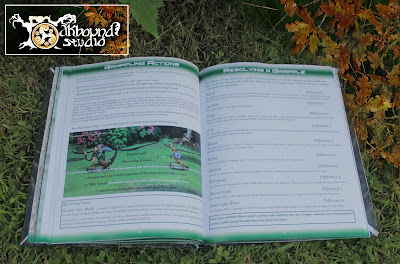 How can you swing a fight in your favour if things are going badly?
It's difficult, as it would be if you've misjudged your opponent. There are ways though. Having support is crucial, if there's a friend to step in and help you out they'll almost always swing the balance, it's really hard to fight two opponents at once (but a shield helps). There really is no substitute for planning the attack carefully. If you can finish a fight in one round and get away that's the best situation, if the fight continues into the next turn and your opponent has a chance to respond and get help into the Grapple then things can get messy. At the start of each successive round of Grappling (the start of every Game Turn) models have a chance to Break Off and escape from Grapples, so if all else fails you can run away. But whether you escape unharmed or not depends on how fast you are and how strong your Decisiveness is.

What are these 'Maximum Values' which crop up on the Action pages?
Maximum Values are a safeguard against ridiculous stats. They don't often come into play, but just sometimes you get a model whose stats are unbalanced to the extent they are able to do things they wouldn't reasonably be able to. For instance, models with very high Courage but low Agility could still move long distances since Movement Actions are based on Dexterity, a combination of Agility and Courage. The Maximum Move Value prevents this by limiting a model's movement to four times its Agility, no matter how brave a model is if it isn't agile as well it can't move fast. Effectiveness of Grappling is constrained by a Maximum Value based on Strength, no matter how quick a model is weak blows won't be effective. That's why most of the Grapple modifiers modify your opponent's score down, not yours up. Maximum Shooting Range is decided by Perception and Maximum Charisma by Wisdom. Every core stat except Courage therefore governs abilities on one Action table, which balances the effect Courage has of increasing both Stamina and Decisiveness concurrently.

The Fateweaving table is unique to this book?
Yes. Fateweaving's great fun, I recommend warbands/adventuring parties always have a Fateweaver of some kind! They really do give you the edge if you can position them right, keep them safe and have them store up enough Stamina.

So Stamina stacks does it?
Not usually, but Fateweavers have a special Gather ability which means they can save Stamina between turns for the purposes of casting more potent spells.

How do you become a Fateweaver?
We'll look at that in the next section, Skills and Items. Stay tuned!

A look inside Secrets of Shandisholm- part 7: Action Tables