A look inside Secrets of Shandisholm- part 4: The Bestiary

Good afternoon all, start of a new week. Today we're looking at the next big chunk of Secrets of Shandisholm, the Almanac and Bestiary which contains background and rules for over 50 different creatures. Some natural, some less so... 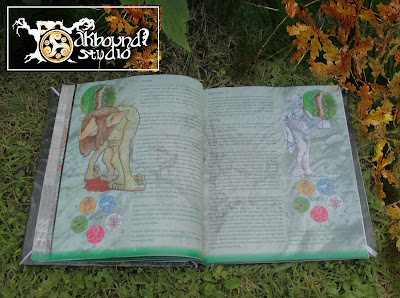 This section takes up a big chunk of the book, what kind of creatures are there here?
The section is split into two, the 'almanac' which has what you might call 'races' of intelligent creatures and the bestiary which has a selection of animals. Some of the creatures in the almanac will be familiar: Leprechauns, Kelpies, Pixies etc. Some are more obscure such as the Fodden, Bauchan and Glaistig. We'll talk about the animals in the next post.

How are the pages organised?
Generally each creature has its own page. The type of creature is listed at the top, followed by a description of its features and character. If there are special rules pertaining to it these are described underneath. There's an illustration of each creature, one of three symbols showing whether it belongs to the class of Woodfolk, Fenfolk or Hillfolk and a stat diagram showing its Wisdom, Perception, Courage, Agility, Strength and Endurance.

Is there a marked difference between the Woodfolk, Fenfolk and Hillfolk?
It's more a guide to where you're likely to encounter them, but the types of folk do have their own characteristics which reflect their environment. For instance the Fenfolk tend to be morose and introverted, Hillfolk are eerie and mystical and Woodfolk are attuned to the natural world.

Are there stock special rules which get applied or are they unique to each creature type?
There's a mix. Things like Aura of Fear (which prevents models from approaching unless they have a high Courage stat) crop up quite frequently, but they get modified by the creature's own stats so some are much scarier than others. Then there are creature-specific abilities like being Pixie-Lead or the irritating habit groups of Boggarts have. They all Activate together and can pool their collective Staminas to perform Fateweaver Actions, so a large group of Boggarts can be a tricky proposition to deal with. 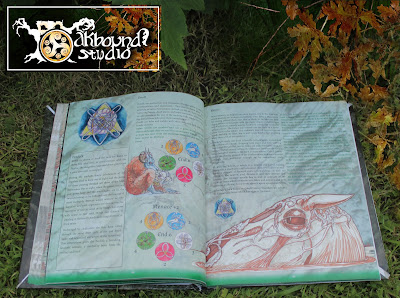 Do all creatures of one type have the same statistics?
As stock, yes. But they can be customised. For example there's a case where a game calls for a Chief Yaltog (weasel-like nomadic creatures who are a bit of a bully), he has the same stock profile as a Yaltog but an extra point of Wisdom. There's a section in the Storyteller's guide later in the book on creating player characters from these creatures as well.

So these are normally encountered as NPCs are they?
Depends how you want to use them. A party of player characters will normally be a group of Tuatha, Fae or Myeri, or a mixture of the three. A game might pit those characters against some creatures from the Bestiary or a GM might introduce creatures into a game where two parties of characters are playing against each other. There's no reason a party couldn't include creatures from the Bestiary as they are, the character creation rules are just there to allow for more customisation if required.

Do you have a favourite?
Nuckelavee! Haha, no actually my favourite creature type is the Bugul. It's a sad little creature which lives in the forests. Bugul have a beautiful singing voice but are physically the most repulsive beings ever to have existed. They have tiny wings and sing of their dreams of soaring care-free through the open skies... it's a sad thing.

A look inside Secrets of Shandisholm- part 4: The Bestiary

Email ThisBlogThis!Share to TwitterShare to FacebookShare to Pinterest
Labels: Oakbound, Secrets of Shandisholm, The Woods