A look inside Secrets of Shandisholm- part 6: The Rules

Alrighty then, let's get down to how this thing works... 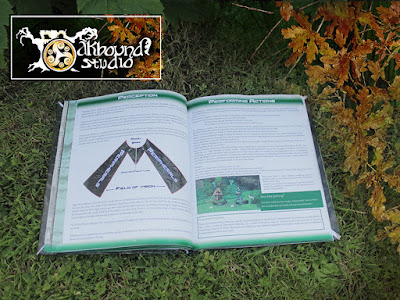 We're about a third of the way through the book now, and we've just hit the rules section. Is there a reason you put it together so it takes so long to get to how to play the game?
Absolutely, several in fact. First and foremost it's because this is envisioned as a sourcebook, not a rulebook. We've included the SystemMech rules in it so that it is a complete game in its own right, but the emphasis is on exploring the world and the creatures that inhabit it. That can be used as the background for any game system, not just for SystemMech. In fact, the rules section begins with a way of importing characters into SystemMech from other game systems and for converting the stats given in the book for use in other popular game systems. Secondly the rules themselves are just there to support the stories as they unfold on the tabletop. The narrative always takes precedent and so it made sense to start by introducing the narrative rather than the rules. Lastly it's because the middle of the book is easy to find so you can locate the rules section quickly when playing. There are also reference tables at the back.

How like other games is SystemMech? And how is it different?
It's similar to many tabletop miniatures games in that you have models representing the characters and they are moved around on the table by measuring distances in inches. There's shooting and combat, staples of pretty much all tabletop games. The crucial differences are that SystemMech uses no dice rolls or card draws to determine success. You won't be asked to roll to hit or draw to see what happens. Instead your models can perform a range of Actions which stack and combine with the Actions of other models and the situation on the tabletop to determine their success. Whilst shooting and combat are present they aren't always the best choices, combat is particularly lethal if things don't go your way. Models can coerce, charm and intimidate enemy models to gain advantages and control over them, and order friendly models to perform Actions out of the normal turn order. It's a bit like playing chess, you need to think a few turns ahead to plan strategy.

Sounds complicated.
Not really. Most of the rules section consists of Action tables, the core principles of the game only takes up a couple of pages. As I say, it's narrative-driven, so planning ahead is only a must if you're bothered about strategy.

What are the core principles then?
There's Perception- that's what your models can see/sense around them. Each model has a Perception Range ( circular area centred on their base) and a Field of Vision (an arc in front of them), anything in those areas can be Perceived and have Actions targeted at it (so long as it isn't obscured by terrain). Then there are the 5 core Statistics each character has: wisdom, perception, courage, agility and strength. These combine to give secondary stats which affect the game, for instance a character's Decisiveness (when they Activate in a turn) is based on wisdom+perception+courage. Their Stamina (how much they can do in a turn) is based on courage+agility+strength. Shooting range draws on Accuracy, which is courage+perception (how well the model can see and how steady they are under pressure) etc. They also have Endurance, which is how much damage they can sustain. That's pretty much it, with elaboration and clarification, except for the one definite legal restriction- no pre-measuring! 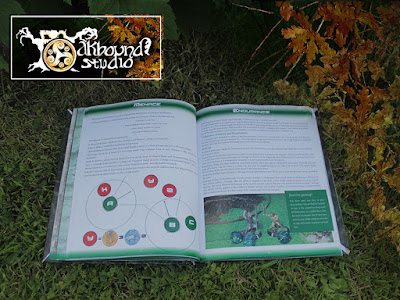 What sort of size games are the rules designed for?
I guess you'd call them Skirmish or Warband games. Half a dozen or so figures per side. Of course, you can go RPG style and have one character each in a party of adventurers with a GM or you can play like any other skirmish game, one player's band against another. The scenarios in the book are mostly for a 4x4' board and last 60-90 minutes.

Not mass-combat then?
By all means put as many models on the table as you like! But it's a question of how many profiles you can keep track of. If they're all the same probably no difficulty in having 20 or so models on a side. There are plans to build a mass-combat system into SystemMech in the near future, but that's not really what this sourcebook is aimed at.

And SystemMech is available apart from The Woods?
Yes. It's available to download free from the Oakbound website. SystemMech itself is a blank game system which can be imported into any world you like and customised to suit. For instance, we're currently doing starter boxes of SystemMech with the Legends of British Steampunk background and will be picking up Factious Waste, our dystopian near-future world, as soon as time allows.

It's also registered Creative Commons.
Yes it is. That means you can download, copy, distribute it, use it in your non-commercial publications as you like. It's a very granular system with lots of space for creativity and customisation so we'd like to see as many people using it in different ways as possible. The only thing we ask is that if you're wanting to use it in a publication or event you'll be charging for you contact us about a small license fee beforehand, just so we don't lose out and can keep putting out in depth sourcebooks like this one!

A look inside Secrets of Shandisholm- part 6: The Rules