A look inside Secrets of Shandisholm- part 11: Scenarios 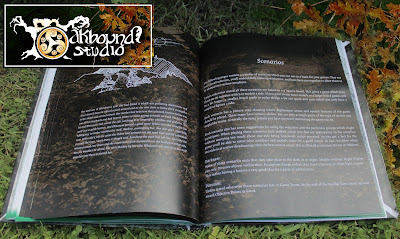 Game time! Tell us about these scenarios then, any general guidelines?
There are eight different scenarios in this section, but of course they're just examples and ideas. Players are encouraged to come up with their own scenarios and we'll be releasing a lot more in the future. All but one of the scenarios takes place on a 4' square board and will last around 60-90 minutes. The Chase has a bigger board at 6' by 4'. All the scenarios have conditions which end the game, but if none of them are met they all last a maximum of 12 Game Turns. Of course you can keep on playing if you wish, but 12 turns gives a good length and degree of challenge.
How are the scenarios laid out?
Each scenario has a title, a bit of flavour text describing a situation which might fit the scenario, objectives for two sides, special rules and conditions, a map showing sample board layouts and deployment zones etc. and some suggestions for how you might use the scenario in a narrative.
There don't seem to be any force lists for either side.
No, it's players/GM's choice. we've given an idea of what forces you might use, but play them a couple of times and you'll get a sense of what size/type of forces are appropriate. They'll be very dependent on how you're using the scenario, what characters are involved in the narrative and what models you have to hand. If you want a tricky situation for the characters to encounter ramp up their adversaries. The sample adventure gives a good idea of how these scenarios can be adapted for different situations. 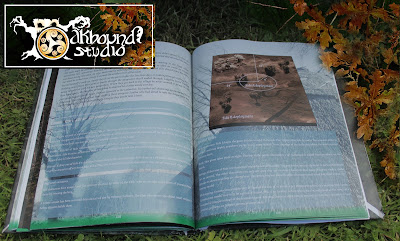 What if more than two players are playing?
The scenarios are listed as having a 'Side A' and 'Side B', there's nothing to say that more than one player can't be on each side. We have some scenarios for more players, these will be released over the next year in one form or another.

Set the scene then, where are we off to for our first adventure?
It begins, unsurprisingly, in Shandisholm, a village in tumult following the disappearance of the chief's infant son. Whilst the village elders debate and organise the chief's daughter takes it upon herself to set out with a few friends to look for her brother...

A look inside Secrets of Shandisholm- part 11: Scenarios