A look inside Secrets of Shandisholm- part 12: Reek of the Fens 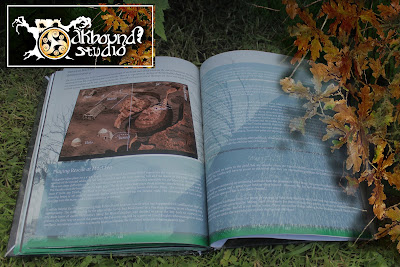 ﻿
And that wraps it up for our look through Secrets of Shandisholm, thanks for joining us...
Wait a minute. You haven't told us anything about this adventure yet.
Well I don't want to spoil the surprises for when people play it.
You can't just skip over this last section, there must be something you can say about it.
All right then. Let's talk about characters. The Reek of the Fens has four main characters, Tuatha from Shandisholm. Of course you can make up your own, these are just examples. Because it's designed to introduce the game dynamics we've got one character who's brave, one who's perceptive, one who's wise and one who's agile. There's a shooting character, a herbalist, a geomancer and the group has a spear and a lantern so they're a well-rounded group.
You mentioned Cynefridd last time, she's the group leader?
Yes, the daughter of Harri Howl the chief. She's accompanied by Braden, a loyal friend who dreams of joining the tribe's hunters. They've persuaded Ifan, the village's champion archer and trusted by the Howl family, to accompany them and as they are leaving they find themselves being followed by Callmauwr, a strange and reclusive child with an obsession for scrawling patterns. These four make up the main group. They can be played all by one player or split between 2-4 players with a GM controlling the other characters they encounter.
What kind of things do they come across?
The adventure uses the scenarios from the previous section, with a list of models involved and any special conditions and objectives specific to this adventure. There's a Fae chase, some mischievous Pixies, saving a lone homestead from a Spriggan raid, being stalked by a supernatural being, breaking into a camp to retrieve a stolen object, trying to win the confidence of a troupe of Yaltogs...
And a special scenario?
Rescue at Mael Fen, the climactic attempt to retrieve Cynefridd's brother from the hands of his captors... or is it? This is quite a complex board setup on a 4' by 6' board, but can be played as two linked scenarios if your table isn't big enough. We've played it with the mountain trail represented by some string laid out across the tabletop and it worked just fine. Of course, we'd love to see pictures if you go the whole hog and make terrain for it!
Any news on when Secrets of Shandisholm will be available?
We're expecting delivery next week. The pre-orders are still available at oakbound.co.uk (in The Woods and SystemMech sections) and will be until Monday 8th August, so you've got just over a week to grab a copy at the special discount price. The first two miniatures boxes should be available from the 8th, a Spriggan Band and the Myeri Clan. They're on their way from the casters and the box wraps are being printed at this moment. As soon as I have them I'll get some pictures up.

A look inside Secrets of Shandisholm- part 12: Reek of the Fens